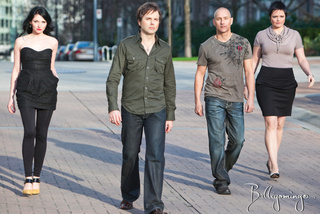 New Age Music by
If you look close enough you can find beauty in all music genres. With some you have to look a little closer than others, but deep within every genre beautiful music does reside, regardless of your...
MORPHEUS MUSIC INTERVIEW - BALLIGOMINGO by
Q: How did Balligomingo become a band? Musical magnetism between the 3 of us. I originally moved to Canada and payed Delerium 25% of my life savings ($4k) to produce a few songs on my album, which...
Balligomingo to play the Vancouver Olympics by
Vancouver January 30th 2010 – Steel Productions, Edgewater Casino and Northern Star Events are pleased to announce, what is sure to be “the hidden gem” for arts and entertainment in downtown...
The Women of Balligomingo by
(updated 13 March 2008) Balligomingo's 2002 album Beneath The Surface drew significant attention from Musical Discoveries and the publication's readership. In the first feature article of its...
p
A
n
E
F
Song Title by Artist Name