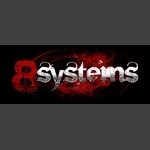 8systems is composed of bassist John Thevenot, guitarist Cameron Hooker, drummer Brent Barnett and frontman Rob Chambers. With influences including The Deftones, Tool, Soundgarden, Alice In Chains and the pop sensibilities of such acts as Incubus and STP, 8systems' music is both artistic and accessible.

Formed in Austin in late 2004, 8systems immediately discovered a powerful sound and a collective voice that would quickly take on a life larger than any of its members. The band members have come to Austin from all parts of the country, each bringing unique backgrounds and approaches to songwriting and having honed their skills and musical vision in numerous bands along the way. After settling on their current lineup, the band began and has continued to pursue an intense rehearsal and writing schedule, with a single-minded focus on developing the sound and style that sets 8systems apart.

The members of 8systems have been interviewed on 93.3 KLBJ, and 8systems' music has been spun on 101X in Austin, they have shared the stage with national acts such as Hurt and Hinder. The band is currently touring regionally to support their ever-growing fan base, in anticipation of an LP to be self released and distributed through all major electronic outlets. A national tour is planned to support this album beginning in early 09. 8systems provides their own radio support and commercial spots on radio stations across the Midwest and Southwest as well as handling all the other professional responsibilities of a driven, independent band. With almost forty years of combined experience, 8systems knows how to work a stage and have a damned good time in the process. But enough print - let the music and incendiary live shows speak for themselves.

“8 Systems, from Austin, TX, have a great sound. The vocals are very strong yet don’t overpower the rest of the band. The guitar is awesome, great drumming, these guys have it all. They have fun on and off stage and get great crowd reactions. I can see a phenomenal future for 8 Systems.” - -- Cody Keng – Del Mar College Foghorn