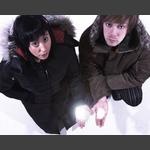 Beehive. A band with one foot deeply rooted in the music of the past, and the other stepping boldly forward into the music of the future! 2007 sees the release of Pretty Little Thieves from Seattle's most exciting Pop.Indie.Electro duo Beehive. (Seattle Weekly)

'This duo makes music that electronic heads can dig into and rockers can rock out to' (MF Magazine). Thus, two worlds collided, and one of the freshest and most innovative sounds of the present was created, while still paying homage to a colorful musical past.

Beehive's current release, Pretty Little Thieves, has earned the band outstanding reviews from respected publications, magazines, as well as over 200 college and core radio stations across the country. All of which praise there modern and unique, yet classic, sound. The Tacoma Volcano calls Beehive "Giant, cool and fun," while adding that the live show is "technology and humans interfacing, causing a tidal wave of infectious energy." Angela Jossey of the Tacoma Volcano goes on to describe Pretty Little Thieves as "fresh and inventive, with an 80s feel. You can not call it retro though, there are some amazing sounds and sonic thrusts on [the record] that are definitely of the future."

Seattle Sound Magazine proclaimed Pretty Little Thieves as, '"Equal parts late U2 and the Killers" this debut full length is infectious, modern and fresh and pays homage to all electro pop rock albums that have come before. Beehive perfectly fills that empty space in your local rock catalog between the United States of Electronica and the Divorce.'

Songs from Pretty Little Thieves have continued to win local and national music competitions through Local Northwest Promotions as a featured artist in the month of October, as well as in the CMJ sponsored competition Ourstage.com, in which Beehive has placed as finalists 9 times in 7 months and won twice in the Alternative and Electronic categories.

Furthermore, Beehive continues to garner national and local radio attention on syndicated shows such as the Coloradowave, Seattle's 107.7 KNDD The End, 90.3 KEXP, CJam in Detroit, and Indie 104 IRadio in LA. Included are also College radio stations across the nation, some of which include: core stations WRSU, WRVU in Nashville, TN, WUSR in Scranton, PA, WRUR, in Rochester, NY, KSCL in Shreveport, LA and WMNF in Tampa, FL. Other college stations Beehive has charted include SFR , WBIM, WCCX, WHRC, KBBI, KSYM, XTSR, KEUL, and SCAD Atlanta Radio, where Beehive debuted at #1 in the first week!

In addition to radio and press Beehive continues to gain momentum through their consistent licensing success. Their current resume includes song placements in CW's 90210, Secrets and Lies Episode, MTV's Real World, Road Rules, VH1 "Old Skool", E Channel "Keeping Up With The Kardashians", Lifetime "Bad Girls Cub", soundtrack placements on feature films such as "Loaded", as well as other corporate placements for Corbis Imaging and Microsoft.

In a live setting Beehive "breaks out the honey" (Seattle Times), by playing several notable festivals and conferences across the continent, such as Bumbershoot in Seattle WA, SXSW in Austin TX, NXNE in Toronto, New Music West Conference in Vancouver, Ladyfest South in Atlanta, Microsoft Gamefest, and the Seattle Pride Festival. Moreover, Beehive continues to build upon their strong Seattle presence with their devoted fans and their nomination as one of the "Best Seattle Electronica Acts" in Seattle's premier entertainment periodical the "Seattle Weekly".

Seattle's KEXP radio calls Beehive "definitely one to keep an eye on," and Future Music Magazine calls them "..far ahead of the pack." Beehive is definitely a band with a fresh new sound--and with the release of "Pretty Little Thieves" they are poised for ground breaking success.

Below are links where more Beehive info can be found!

Over 200 College Radio Stations across the Nation some of which include:

KEXP Review of Operation Artichoke EP by KEXP
Beehive brings fantastic chorus melodies reminiscent of Joshua Tree era U2, and refrains reminiscent of Violator era Depeche Mode, while Butterfly Beats really shows off her programming and...
Seattle Sound Magazine by Joseph Rippii
Securing equal influence from late-U2 and the Killers, guitarist /vocalist David Miller teams up with electronicist/vocalist Butterfly Beats to form Beehive. With a name that's bound to get the...
Beehive Drops Another Banger by Angela Jossey Weekly Volcano
met Alethea "Butterfly Beats" Eichhorn and David Miller of Beehive about two years ago at the Premiere (now the Phoenix) in Seattle. We were both hired to entertain at a Microsoft Gaming...
MF Magazine by Erik Schultz Editor
One of the best Live Electronic Bands in the Northwest! This duo makes music that electronic heads can dig into and rockers can rock out to. Beehive is Rad!!!
Seattle Times by Tom Scanlon
Beehive is on an entirely different trip. The "rocktronic" duo gleefully mixes rock and electronic, in the tradition of the Chemical Brothers. Beehivers Alethea "Butterfly Beats" and David Miller...