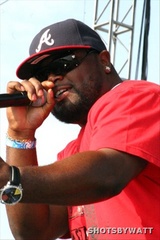 Father, astute businessman, blue collarded worker, and hip-hop standard bearer-With all these titles, no wonder the Greenville, GA native Delano Clemonts a.k.a. Big Train has come to be one of North Carolina’s hottest underground artists. With the release of his first underground, most anticipated rap album, “Blue Collared”, we get the introduction to the every day blue collared worker. "It's really a conceptual LP," Big Train explains. "Some would say I have an all in one personality. I am calm, cool, and collected one minute, and ready to take a violator’s head off the next. I'm just taking the time out to illustrate the go get it in me. There is also the laid back, business side of me. I have my own production company titled Rayon Music Group which is one of the biggest underground production groups in North Carolina so I’m definitely “On My Grind”. Since 2000, Big Train has become one of the rare hip-hop artists who can say that his fan base is growing, his underground record sales have increased with each new release, and that the critical accolades have continued to flow as well. His hard work and consistency was finally recognized earlier this year with beginning awarded the opening act for Foxy 99.1 Summer Jam 22 of Fayetteville, North Carolina. He is also a 7 times winner of the Iron Mic competition hosted by Mike Tec of Foxy 99.1, a local radio station. If you ask the thought-provoking MC if he's satisfied with his success, he'll tell you it's not enough at all. Yes, he is grateful for all the support, but he still feels he has way more to offer and is far from being content. Blue Collared is his most eclectic project to date and it finds the rap icon at the apex of lyrical skill. The album is for the everyday person that works hard but plays harder, the blue collared worker. The first single, "On My Grind" is a Rayon Music Group production - a brash anthem that trumpets Big Train’s triumphs and puts everything inconsequential to rest. "Basically, I'm just telling people that everything I do or I say I'm going to do, I back up. There are a lot of individuals out there who can't say the same. Even after all the success I have attained for myself, there are still some people out there who want to doubt me, which is cool, but I love to shut them up." Almost a definite second single is "Stack After Stack," which has Big Train teaming up amid the tenured, versatile maestro, Glockstyles. Rich with Train and Glockstyles’ trap-instilled poise, the track infuses Down South bounce with a worldly look that will undoubtedly shake the clubs to their foundations this summer. Meanwhile, "Act like You Know," another Rayon Music Group production, gives a lesson on what separates Big Train from everyone else, his mojo so to speak. "You couldn't duplicate this if I told you how to," he raps. Other producers contributing to the project include Moje, and even Train himself. "I've done all the tracks for my previous albums that some people may or may not have noticed, but I have a team and we do some things," he said modestly. "I'm really trying to get my hands into all aspects of entertainment, not just rapping. I can multi-task." Besides being an artist in the recording studio and running a Production Company, Big Train has several businesses off the ground, including his record label "I'm not stopping," Train states. "Yes, I've come very far from where I was on my first album, but I consider this just a small measure of success. I'm always going to continue to strive to be the best."

by Mike Tec
Big Train is next up he's won the Fayetteville NC Summer Jam Competition two years in a row I look for him to be in the industry real soon.
p
A
n
E
F
Song Title by Artist Name