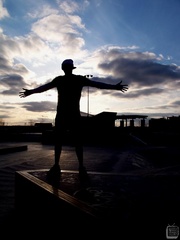 Born in Glendale, California; 21 year old Isaiah Davis (BiG ZaY) has always had a passion for music due to his father being an accomplished pianist, songwriter & composer, & mother running a successful Smooth Jazz Concert Promotions Label as President & CEO, in the Quad Cities, Iowa. His unique ability to dance, rap, sing, write & produce hit songs is defiantly a hard package to come across in the great state of Iowa, although Iowa is inundated with many young artists. From a young age, matching great melodies to unique & powerful hot drum beats has always been a special talent of his, and that special talent is showcased in his first EP Album “Play No Games.” His Play No Games album is a simple yet sophisticated crossover between, Pop, Hip-Hop, Heavy Metal, Do-Wop & Acoustic music with uplifting harmonies & beats that will have you boppin all day long. It’s defiantly something you would want to put in your car with bass on full blast!

He takes you on a light journey into a world of fun where hopping out of a Lamborghini is an everyday thing, from having a good time at the clubs with friends, to spotting “Butterfaces” in a mass crowd of women, and coming together at the end with the well orchestrated, beautiful & enticing track “Love Can Change The World.” With great hooks, catchy phrases & a feel good sound, Play No Games will have your endorphins releasing in a matter of seconds. If BiG ZaY could say anything to you it would be, “Life is a gift, change for the better, & last but not least, practice The Golden Rule!” Enjoy!