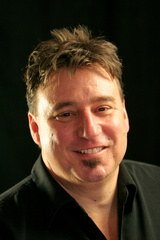 Bill is an extraordinary singer, songwriter, pianist based in Boston whose music has been defined as Soulful, Funkified Jazz / R&B. He started playing rock and blues on the Hammond B3 organ on his first working gig with a bar band playing the waterfront in Troy, New York. This 9 piece band covered everyone from Chicago to Earth, Wind and Fire, to the Ohio Players and jam bands like The Allman Brothers, Santana, Tower of Power and Traffic.

A few bands later, Bill found himself on the road with club and small venue acts. Being self taught, Bill picked up everything he could from the wide variety of the players he toured with, including jazz standards, jazz fusion, reggae, southern rock and blues, alternative rock, and Latin / salsa.

He came to Boston to attend Berklee and learn more about his trade from the best. Boston is now his home, where he has backed up such artists as Paula Cole, Lynn Fiddemont, Charles Pedegrew, James Montgomery and others. Bill’s passionate, energetic show can be seen in the North East US at many clubs and festivals.

Bill generally performs with his trio. He travles with keyboards, and backline equipement as well as a small pa able to be used in small venues of up to 500 people, and as an on stage monitor system for larger venues. Bill prefers to perform with a grand style acoustic piano when available. Electricity is required, and room for keys, percussion and bass. Lights and sound, stage crew and engineers can be provided by the band at cost, but it is preferred that the venue provide these for rooms larger than 500 people or outdoor venues. A stage plot is available online at http://www.sonicbids.com/billchampitto

Canadian Music Week Compilation by Canadian Music Week
Canadian Music Week, Best Unsigned Artist 2006
Masterful.…. well crafted and excellent... by The J from GarageBand.com
“Masterful.…. well crafted and excellent... Bill has a soulful voice filled with a great ebb and flow. His vocals are tight and thoughtful. Its a great R&B … may be the best I have heard.“
GarageBand.com awards by GarageBand.com
Chosen as Best Male Vocals in Jazz,, Best Keyboards overall, Best Beat in Jazz by GarageBand.com reviewers.
Review of "Water's Edge" by Ben Maitland-Lewis Sidehatch E
“passion and commitment – this music is about picking one thing and doing it better than anyone else… Bill knows what he is doing, is soulful and jazzy….”
Inclusion on Best Emerging Artists CD by Marty Marmor, Schmusicmusic'07
“Some of the best unsigned music in the world”
The Que 98.2 FM Online Smooth Jazz Radio by Jason (Airomee Wind)
I love the music, Bill is a classic. In the long run his efforts will take him a long way.
The Musician’s Atlas, Artist Spotlight 2008 Artist by The Musician’s Atlas
Included on their Artist spotlight compilation.
Expose Your Muse Compilation by Public Muse.
Included on “Expose Your Muse, Blues and Rock Collection” 2008, distributed globally by Public Muse.