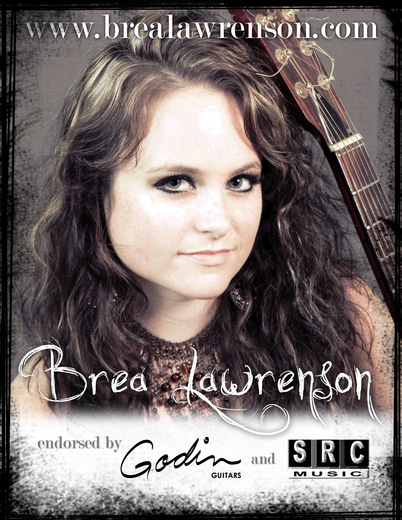 Brea is a young Canadian artist whose body of work reflects her personal search for meaning. She just released her third album, produced by Juno Award Winner Keith Glass (Prairie Oyster) in May 2012 and is scheduled to play the RBC Ottawa Bluesfest 2012 twice!!

Her extraordinary vocals, her passion and her unique writing style put her in a class all her own. During her career she has gained a loyal following of fans that identify with the things that have become important to her. As the National Spokesperson for the Canadian Red Cross – RespectEd program, Brea tours western Canada each fall, performing and speaking to students in schools about the affects of bullying.

Her second album “no regrets” was produced by Ottawa’s Joe Turner and UK world renowned Producer, Stu Epps. Stu is well known for his work with Elton John, Led Zeppelin, Bill Wyman, George Harrison and many more. Brea has continued writing with many talented writers including Country Hall of Fame, Barry Brown,

Brea has dedicated much of her childhood to music and wouldn’t change a thing. She has accomplished more than some people only dream of and if you ask her she’ll tell you … “it’s been worth every second…I have No Regrets.”

Brea just completed another video for her song “If I’m Not Here Tomorrow” and dedicated it to Military Men and Women everywhere, with the greatest respect. It can be viewed on her websites as well as on Youtube.

Young area singer's musical DVD pays tribute to Canadian soldiers by Jeff Maguire
EMC Entertainment - Breanne Lawrenson recorded her first album when she was just 15 and she has been working hard to build a career in the music business ever since. Recently the Carleton Place...
Making Music For The Troops by Cheryl Stornelli
Matthew Bradley knew there was a reason he discovered his long-lost cousin a few years ago. Surfing the Internet in his Brantford home, Bradley discovered a MySpace friend invitation from Breanne...