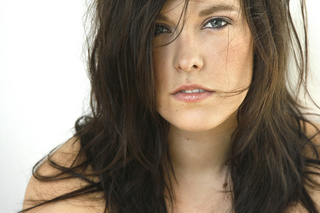 Poised with infectious melodies and a mature lyrical sensibility, the music of Brianna Sage exemplifies the beauty that comes from following a dream and finding yourself along the way. Perhaps it’s because she was born in Texas, raised in Hawaii, while spending summers in Munich and Amsterdam, that her music reveals an unwavering determination to find her way, all the while making the most of every step on the journey. Her talents were first recognized by former Police manager Miles Copeland at SXSW who signed her to a management and publishing deal in the Spring of 2001 when she was 17 years old. Copeland soon invited Brianna to attend a songwriting retreat he hosted at the Chateau Marouatte, his castle in France. Along with twenty-four other songwriters from all genres of music, Sage had the opportunity to write with some of the best and most established writers in the business, including Carole King, Mark Hudson (Aerosmith, Ringo Star All Star Band), Hanson, Gary Burr (Faith Hill), Ed Robertson (Barenaked Ladies), Miles Zuniga (Fastball), Marc Copely. "It was an amazing experience," Brianna remembers. Due to the effects September 11th had on the music industry and a desire to change her musical direction, she later parted ways with Copeland. The time at the castle proved to have had an added bonus. It was there that she first crossed paths with the person who would produce her first album, In My Hands, Marc Copely. What began with Brianna and Marc merely writing songs together, quickly evolved into Copely producing the entire album. She also seized the opportunity to write with several of NYC's finest up and coming artists/songwriters like Jess Klein, Jive Jones (Mandy Moore), JJ Appleton, Alyson Faith and Jo Davidson (Meat Loaf). With the release party of In My Hands being held at one of NYC’s finest music venues, Joe’s Pub, and being backed by a band of seasoned musicians Winston Roye (Jewel, Lauryn Hill), Marc Copely (signed by RCA), Clancy (Constantine Maroulas, Spiderman on Broadway with U2), Celia Chavez (Pink) and Daniel Mintseris (Maryanne Faithful) the night was a huge success. Her single “Speedboat” received airplay across the country including Philadelphia’s prestigious WXPN and KCUV in Denver, CO. In support of her new record Brianna headed back to Texas for an acoustic tour playing venues across Texas and many Borders Book stores. It was then that she was asked to open for Grammy nominated Billy Joe Shaver. After the show Shaver said, “Brianna, I should have opened for you”. Brianna currently lives in New York City, and continually writes new material. She is recording a new album with Dan McLoughlin from The Pushstars, slated for release in early 2009. With every new song, Brianna demonstrates her natural ability to craft catchy rock songs that highlight her considerable vocal talent. She has taken part in legendary New York Songwriters Circle at The Bitter End, and has performed in most of NYC’s finest music venues. As well as being handpicked to perform at the 2006 Songwriters Hall of Fame New Writers Showcase, her song “Words” was featured on their 2007 New Writers Compilation CD. Her songs can be heard on All My Children, and VH1.

if playing solo - one mic and one direct box input for acoustic guitar.

by Joe Santa Maria Radio
If you want to hear a song that will make the little hairs on the back of your neck stand up and take notice...listen to Ana by Brianna Sage. It's like listening to a dream...gorgeous vibe...
by Tracy Currie
June 2008, we hosted Brianna Sage for a private house concert at our home in New Jersey. We are big fans of Brianna so this was something we were very excited about it. Words truly cannot describe...
by J-Sin, Smother.net
Funky female singer/songwriter Brianna Sage is a great showwoman in a genre that’s bloated and confined to some extent. She breathes life into poignant lyrics that challenge what you’d expect a...
by Starpolish.com
Hailing from Brooklyn, 20 something Brianna Sage can be found playing all the local spots in NYC pretty regularly. Citing Jackson Browne, Sarah McLachlan, and Madonna as influences, the young...