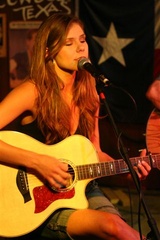 There is definitely something about Britni. Her music has a soul. Britni Hoover is where the rubber meets the county road that winds through her hometown of Frederick, Oklahoma. She has been living her dream playing with and opening for some of her favorite artists which include Michael Martin Murphy, Charlie Robinson, Jack Ingram, Mark David Manders, Larry Joe Tayler, Mike McClure, Reckless Kelly, Little Big Town, and the legendary George Jones. Britni is a real country singer who lives the life she sings about in the heartland of America. Her music represents much of what down-home country music should be by bringing back genuine sentiment and naturalness that is instilled in her music. Her rich honey voice has a pulse and a warmth that resonates with an undeniable charm. Britni has a born-to-it talent for real country music that just comes natural and never sounds forced. On her recently released album, you will find songs written by Britni as well as artists such as Blu Sanders, Jack Ingram, Mickey Raphael, Taylor Swift, Tony Martin, Mark Nesler, and Jennifer Hanson.

'Stripped' Set Rolls Into Town by Lake Country Life
Britni Hoover, who will perform at Poodie’s Hilltop Bar in Spicewood on July 19, is possibly the most self-effacing performer with a heap of God-given talent one will ever have the pleasure of...
p
A
n
E
F
Song Title by Artist Name