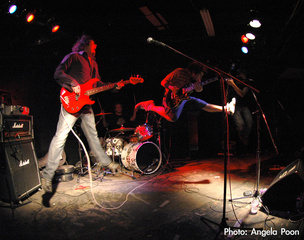 BROOMFILLER is Toronto, Canada’s answer to melodic punk rock. Having been compared to the melodic punk rock sounds of Bad Religion, Face to Face, Millencolin, Husker Du, Foo Fighters, and Bracket, (to name a few), their heavy melodic punk alternative sound, with melodic vocals, soothing bass lines and rhythmic drumming is a blend of music, style and performance which enables them to truly stand out.

"Enter the Storm" is their sophomore album which follows on the heels of "Watching the girls go bi", which received much success and recognition across Canada, USA & Europe.

BROOMFILLER have been compared to Foo Fighters holding hands with Bracket while sitting on a park bench eating a sandwich made by Bad Religion, Face to Face & Husker Du.

BROOMFILLER completed a 7 week US tour (Mar-May '06) and have just recently completed a 2 month tour (Oct-Dec '06) both in support of "Enter the Storm". They have toured extensively in Canada since 2002 and in the US since 2004.

BROOMFILLER will be doing a cross-Canada tour (April-May 2008) in support of Enter the Storm.

Best International Artist at the Inland Empire Music Awards 2008, for 3rd consecutive year in a row.

Charting on US college radio including #1 in York, PA.

Greg Cataline Interview's Richard D. Leko! by
Interview with BROOMFILLER's Richard D. Leko!www.myspace.com/broomfillerDate: Nov 10 2006 - (Somewhere in California on their 2006 Tour of the States)Richard D. Leko - guitar, vocals, songwriter...
Bill Messick - New Artist Radio by
When it comes to rock & roll BROOMFILLER knows how to set the standard of clarity to a new level of wow! This band has what it takes to be among the greats in the business of music, this music...
Linaea Tawney - Viciousmusicmag.com by
BROOMFILLER "Enter the Storm" LPReviewed by Linaea Tawney - Viciousmusicmag.comDriving guitar riffs open up, add to that a similar driving drum line and Richard Leko's vocals and you have got the...
Gregory Cataline - MUEN Magazine by
BROOMFILLEREnter The Storm" - reviewed by MUEN MagazineImagine Ozzy Osbourne turns punk and re-titles himself BROOMFILLER! Ok, it's not that extreme, but there are some similarities in the vocal...
Hawk - MousaGenre Promotions by
BROOMFILLER "Enter the StormReviewed by Hawk (MousaGenre Promotions)http://www.geocities.com/mousagenre/reviewshttp://community.livejournal.com/talk_music/BROOMFILLER's new video 'The Cause' online...
Rokky - BigRockFinish.com by
BROOMFILLER at Rock & Roll Heaven - December 20, 2007Reviewed by Rokky - BigRockFinish.com (Febuary, 2008)So the last show that I went to in 2007 would have been the BROOMFILLER set at Rock...
Scott Bryson - Chart Magazine by
BROOMFILLER Take The O.C. By StormMonday October 29, 2007 @ 05:00 PMBy: ChartAttack.com StaffIf we've learned anything from television's The O.C., it's that California kids seem to be in the know...