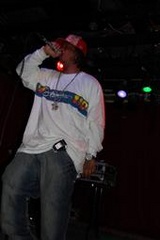 Born on September 10, 1982 in Washington, D.C., David Richmond better known as D. Wayz had an uncontrollable urge to perform. At age five, he was singing for his mother and her friends every weekend while they played cards and drank: Shortly then after, he joined a singing group managed by Nonchalant a local Washington, D.C. artist but D. Wayz saw his future in a solo rap career. At the age of 8, he wrote his first rap and at 13 he stepped into the studio for the first time in his life. After completing his first song, he knew that this is what he wanted to do. In 1998, D. Wayz came together with Rock Bottom Records in which his current partner owned and because of the other artist on the label and the chemistry that they shared it helped sharpened his craft that much more. At 19 years old, he dropped an album called Chocolate City living and 4 mixed tapes which sold great in the streets and allowed him to work with Shorty B of Dangerous Crew and Digital Underground, Yuk Mouth of Rap-a-lot Records, Gonzo of the South Central based group called Kaution, E.U. Suga Bear, Lil Benny and a host of other local known and unknown artist. In this experience he was able to travel all around the East Coast performing at well known clubs in Atlanta called Club Miami and Level 3, Club 609 in Miami, and in Washington D.C., Club Love, Rythms, The Tunnel, The Legend, The Galleria in Georgetown and performed at a number of local clubs. Currently D. Wayz has the ground under his feet and is no longer looking for a label to be an artist to. He has started his label with his childhood long term friends and dropped his highly anticipated album titled Junky Muzik. D. Wayz sees his future as an artist successful and promising.