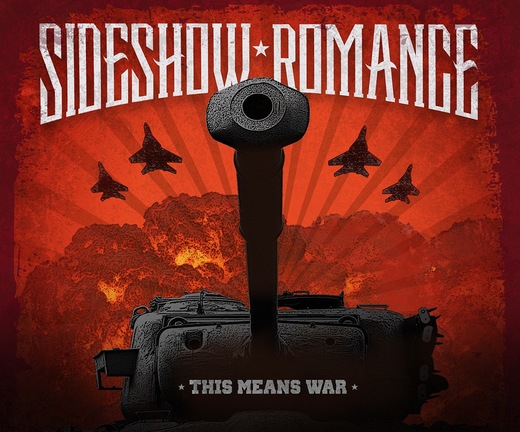 High energy, never quit, a melodic kick in the teeth…these are all ways that describe the driving force that is Sideshow Romance.  Since the band formed in 2011, they’ve went non-stop, both on stage and in studio, swinging for the fences.  They came right out of the gate and recorded with major label producer Brett Hestla (Dark New Day, Framing Hanley, Creed) to slam out their first single “Take Me Down”.  They used this to garner regional radio attention and put them on the map in the Midwest.  After sharing the stage with such bands as Papa Roach, Halestorm, Puddle of Mudd, Theory of a Deadman, Pop Evil, and Eye Empire, and touring across the U.S., Sideshow Romance set the bar, not only in their local area, but the surrounding area as well.

In 2012, they recorded their follow-up single “Numb” with producer Brandon Wootten from Framing Hanley.  This brought even more shows and more support from regional radio.  Winning radio “cage match” after cage match, the head of steam continued to build for Sideshow Romance and led to more shows and a tour run through the Midwest.

In March of 2013, Sideshow Romance went back in the studio with Grammy nominated and Dove award winning producer Travis Wyrick (P.O.D., 10 Years, Adelitas Way) to cover the Jars of Clay single “Flood”.  That was followed up in the summer of 2013 with a 6 song EP titled “This Means War”, which is slated for a February 2014 release, with the lead single “Goodbye”.  In August of 2013, Sideshow Romance was chosen to be a part of the Coldcock Herbal Whiskey stage on the Rockstar Energy Uproar Festival, which featured Alice In Chains and Jane’s Addiction.