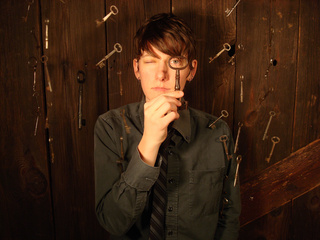 “An interviewer asked Chris Pureka to sum up her music as a haiku. I will: Folky sorrowful songs of loneliness and hurt, longing to reunite. Her tunes have the grave Appalachian flavor of Neil Young and Gillian Welch; her guitar playing is subdued but quietly virtuosic. And her voice can be a desolate whisper or a bitter accusation. There’s no comfort, for her, in the clarity of her observations.” – John Pareles, THE NEW YORK TIMES “Introspective and deep, the landscape is akin to Neil Young's Harvest” –The AllMusic Guide “For a woman who frequently performs solo and whose compositions are more quiet than clanging, Chris Pureka is making a lot of noise.” –Billboard Magazine Chris Pureka is a breath of fresh air in an age of fleeting success and temporary notions. She is an artist of substance, armed with a sharp eye for oft-missed details and an emotional intelligence that can switch from withering to compelling with a subtle inflection. On her third release, How I Learned To See In The Dark set to hit via Sad Rabbit Music /ADA on April 13, Pureka expands on her distinct and beautiful melodies exploring broader musical soundscapes all the while maintaining the stunning vocals and distinct guitar work she is known for. With her 2004 debut LP, Driving North, Pureka started a career as a touring troubadour and began building an impressive fan base from the ground up: a cult following that started in her native New England and steadily grew to a national level. Fans and critics alike were drawn to the signature voice that somehow makes heartbreak sound desirable and her acute attention to lyrical detail, while others lauded her aptitude for crafting guitar parts that speak for themselves. The Boston Globe raved that "[she] is such a gifted guitar player and singer that you have to listen to each song twice, once for her guitar playing and again for her passionate lyrics about love, loss and hope." With her 2006 follow-up, Dryland, Pureka further expanded on the emotional topography she charted earlier in her career by continuing to tour extensively playing 200+ shows a year and gathering supporters city by city, show by show and fan by fan. This year Chris will take touring to the next level by adding a full backing band to her incredible live show. While maintaining the unique alchemy of longing, loss and hope this virtuoso sets to music, there is a sonic adventurism on How I Learned to See in the Dark that marks a new stage in Pureka’s musical evolution. This is aided by Pureka’s choice of co-producer and longtime friend, Merrill Garbus (4Ad’s tUnE-YaRds). In addition to enjoying the comfort that comes with working with someone you’ve known since middle school, Garbus brought to the table her signature quirky recording techniques and alternative instrumentation, helping Pureka shift her sound into as-yet uncharted territory. This record boasts a newfound edginess, coupled with a more abstract sound and a musical depth and complexity that shines through each track, all the while maintaining the space and creative instrumentation Pureka is known for. Standout track, “Landlocked”, showcases Pureka’s technical prowess with the finger-picking style that won her so many accolades on Dryland while “Broken Clock” is the rhythm driven, heavy hitter bound to be on your next break up mix. “Wrecking Ball” mixes a playful quirkiness in production with an underlying paced anger, laced with twangs of percussive guitar. Album closer, “August 28th” is the deep breath following the emotional tumult that precedes it – a return to quiet contemplation for the writer and the listener: “I think the whole world needs a shoeshine/I think we’re all living proof.” It has taken years for Chris Pureka to arrive here, and each step has been as purposeful, as precise, and as unwavering as the music she makes.

Northeast Performer Cover/Feature Oct. 2006 by Performer Magazine
Autumn is a transitional time, a vivid trip towards the end of the year that brings people from all points in all areas of the globe to the Northeast region. These travelers coast up and down...
All Music Guide by All Music Guide
Dryland's essays and musical sketches plunge the listener into sensitive and moving tales accompanied by Chris Pureka's Stevie Nicks-style guitar plucking and distinctive voice. Listen to her...
p
A
n
E
F
Song Title by Artist Name