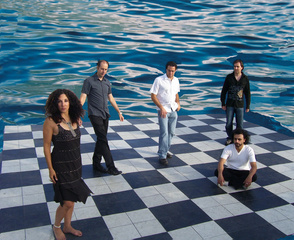 Christine Ann Atallah and The Bassalindos

Christine Atallah & The Bassalindos: are Montreal's acoustic world pop multilingual gem from Montreal, reflecting a kalidescopic heritage of cultures mingling pop, and sometimes jazz with Arabic riffs and Latin colors. Christine Atallah's voice and captivating compositions manifest her heritage as well as her classical training and sultry jazz savoir-faire. She is a Mediterranean Diva of the snowy North who fluently speaks and performs four languages. This group has played a bevy of major festivals around the world and in North America and Christine and Danny as a duo dazzled crowds of 5000 a night at Ceasar's Palace. They have been described as: "riveting" and their songs as "addictive" by critics and fans alike.

Find yourself seduced by Allmusic.com
Even if you don't speak any of the five languages that the sensuous-voiced Christine Atallah sings on this magical, multi-ethnic kaleidoscope of a collection, you'll find yourself seduced as...
p
A
n
E
F
Song Title by Artist Name