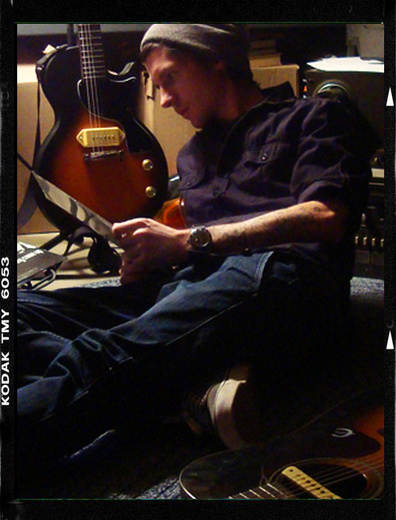 When slinging this album around to listeners around the globe, the most common response to date is, “Who the heck is this!?......Can I buy one!?” The album in question belongs to none other than Phoenix musician Christopher Kevin. The first track “Dishwashing Blues” is riddled with clever verses and a catchy chorus held to tempo by the simplicity of beating the back of the guitar. When asked about the origin of the second track “Mona Lisa” in an interview with Music Patch Magazine he replied, “It was written while I was staying at a friend’s house for a short while. She had Mona Lisa painting on her wall and I used to yell at it. "MONA!!! SMILE!!!....BIGGER! SHOW ME TEETH; COME ON MONA SMILE!!! Growing up in southern California on a ranch once owned by James Cagney, he discovered an old guitar in a barn on the property. After taking the old guitar to the small local music shop, it was equipped with a new set of strings and a young boy equipped with the “G” chord. He’s been plugging away ever since. To date, his two EP releases “The sittin’ around EP” and “Mona” have sold countless numbers from ages four to sixty-four! You’ll enjoy your listening experience with Christopher Kevin…..I dare you to try and prove me wrong!

Music Patch Interview by Click here for Article
Interview with Christopher Kevin with Music Patch Magazine.
Pop Rock Candy Mountain by
Add one cup of Mika, two tablespoons of Eric Hutchinson, a handful of Gavin Degraw, and stir in a package of The Beatles to get dish full of Christopher Kevin's strong and refreshing sound. You...
Chris Metzger Photography by
Christopher Kevin, the wake-up style music that I can always count on to make my day start off well. It fits perfectly in any part of my day, and is catchy stuff that interests many people. The...
Tate Music Group by
Christopher Kevin exhibits some of my favorite qualities of music: distinct melodic vocals, a rhythmic acoustic sound and well-written lyrics that are fun to sing along with!-Brianne WebbTate Music...
Living Head Audio by
“My studio manager in charge of recording Chris’s CD “Mona” called me at midnight after Chris’s had left to tell me how amazing this young kid was that came in to record…and I must say, I totally...
85239 Magazine by Click here for Article
Christopher Kevin: Maricopa musician and local entertainer
p
A
n
E
F
Song Title by Artist Name