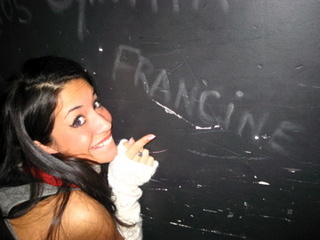 Originally a Manhattan baby, this Native New Yorker grew up with music pouring through her veins! In high school she was voted Most Musical and is widely known as the tiny girl with the BIG voice. Her best memories are when one of the songs she recorded in a studio was aired live on radio station KISS FM and was voted 91% kissed on the 'Kiss it or Diss it' segment. She recently graduated from Five Towns College with a degree in Music Business and hopes to one day go to law school to become an entertainment lawyer.
Ever since she was 18 months, she has been singing wherever she can be heard, whether it was talent/state competitions, benefits, live gigs, school functions, baseball stadiums, and various theatre productions. Some of her hobbies include, singing, dancing, acting, playing guitar, swimming, shopping and writing just to name a few...
Some of her accomplishments include being featured on several shows on MTV, interviewed on The Tyra Banks Show, interviewed on E! News twice (still going for that third!!), performing on NBC's 'Gimme the Mike' as well as starring in a promotional commercial for 'My so-called Life' on the Noggin channel. She currently holds the title of Hudson Valley Idol, Orange County Top 3 vocalists and has opened with Lexi Lawson for Grammy Award Nominated R&B and PoP Singer, Songwriter Ne-Yo!
Cina states she will someday be famous for something great. Her motto is to never hope your going to be something, always think positive and say YOU ARE going to be what you want to be. If you truly believe in yourself, then there is nothing that will get in the way of your dreams coming true!

Raceway Hosts Beauty Pageant by Ted Waddell
MONTICELLO — July 19, 2005 – While trotters raced around the cinder track at Monticello Raceway on Sunday afternoon, a bevy of beautiful ladies competed in the preliminary round of the 12th annual...
GIMME THE MIKE WNBC by Gimme the Mic WNBC
From the smallest towns to the biggest cities across the American landscape, there are countless talented singers dreaming of their chance at stardom. To be sure, network series like AMERICAN IDOL...
LOCAL 'LEGEND' TO BE ANNOUNCED by Sandy Tomcho
The votes are almost tallied. Our own "Hometown Legend" will be chosen Tuesday at Anthony's Pier 9 in New Windsor. The singing contest, "The Hometown Legend Show," began in late August and ends...