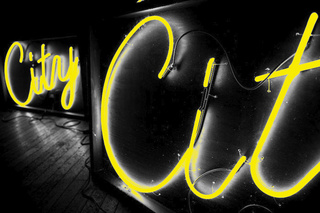 Combining catchy songwriting with synth-driven guitar rock, City City stands out as a beacon of hope for those who want electronic music with soul and artistry. Guitarist/engineer Jeff Kirchner, guitarist Kyle Minichelli, and singer Dan McCollister formed City City in 2006. With a unique approach to songwriting, they composed in studio and set out to create a distinct concert experience from these recordings. The desire for more human energy and a stronger live show prompted the addition of bassist Valerie Ngai (Sara Radle Band, Calamity Magnet, Loverlee) and drummer Jarrett Portnoy (Julia Knew) in 2010. Sounding better than ever and boasting a dedicated fan base, they are poised to bring their unique blend of radio-friendly danceable electropop to fans everywhere.

City City @The Mint by Flavorpill.com
Taking equal inspiration from Ace of Base and David Bowie, LA outfit City City can't seem to choose between rock, pop, or electronica, and they wouldn't want it any other way. The beautiful...
p
A
n
E
F
Song Title by Artist Name