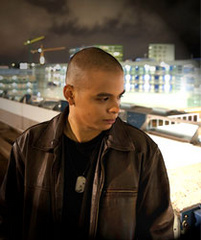 Clarck C (Diego Rodrigues) is a Dutch based electronic music artist.
He started producing music at age 17 and got his first (Hardcore/Gabba House) release in 2001.
As his alter ego Deester he released quite a few Hardcore/Industrial/Hard Techno records.
Some tracks came out on his very own industrial hardcore label: Black Belt Fight Music (BBFM).

In the fall of 2007 he participated in an A&R session at the Amsterdam Dance Event. For the first time he got a chance to present his Break Beat material.
Clarck got such good feedback and got so motivated, he decided to release his music by himself.
This lead to the release of “The Chase”, Clarck’s first E.P. that came out in the fall of 2008.

After the release of “The Chase”, Clarck’s first release, a lot has changed.
Clarck invested more in his sound in terms of equipment, education and information.
You can definately hear the results of his effort in
the releases that followed (“Almere City Skyline” and “The Kingdom”)
Always pushing himself to the next level, this artist is sure to deliver quality, eardrum rocking tracks.
Innovation, revolutionary; these are the things Clarck stands for.