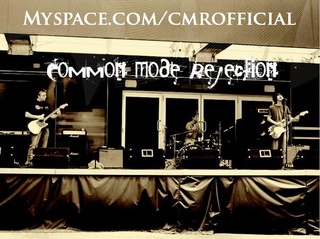 Chicago's own Common Mode Rejection came about when brothers Jeff and Jesse Aquino wanted to form their own band. The highly influenced grunge musician, Jeff Aquino, wrote songs ever since the age of 16. His influences ranged from Nirvana and Alice in Chains to Silverchair and the Vines. Now at the age of 20, he hopes to relate his songs to teens everywhere whether it's from being down to being lost. Jesse Aquino, the highly influenced blues musician, started playing the drums after he learned the guitar. Mainly influenced by the blues, he learned guitar techniques related to artists such as Stevie Ray Vaughan, B.B. King, Jimmy Paige, and John Mayer. Jesse found a new instrument after the guitar; the drums. Influenced by drummers from the hip-hop sense to the hard rock scene of Led Zeppelin, Jesse found his own unique sound. Together Jeff and Jesse formed the hard rock band Common Mode Rejection. Recenlty, they added Adam Hosteny, the rhythm guitarist and second vocalist. Hosteny was also along similar influences with Aquino. CMR started in early 2009 and since then have found moderate success playing around the Chicagoland area at venues such as the Taste of Chicago, Clearwater Theatre, Penny Road Pub, and Bill's Blues. Recently, they have been working on their first album entitled "The Mind-Body Problem," which is set to be released before 2009 ends. Look out for it on ITunes. With hard and grungey tones of tunes such as "Fall" and "Bad Vision" to softer songs such as "Insane" and "Back & Forth," CMR hopes to reach the furthest, true audience possible. It's not how good you sound. It's how much passion and life you put into the music. Check out CMR at Myspace.com/cmrofficial and youtube.com/neweraguitarist18.

NEW VERSION OF "FALL" by
The hard rock band, Common Mode Rejection, finished their first single off of their debut album, "The Mind-Body Problem." Go to Myspace.com/cmrofficial to check it out and to get updates on the...
p
A
n
E
F
Song Title by Artist Name