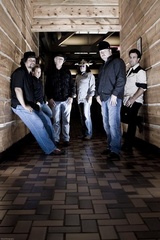 This ain't Mall Country.
To put it simply: This band is NUTS.
Yeah, in a good way, but keep an eye on 'em nevertheless.

CRAZY.
It's not a word you'd associate with today's watered-down, pop-friendly country music. But when Chad Kessner careens around the stage belting out Waylon's "I've Always Been Crazy", it's not just a tribute to a fallen outlaw; it's a testimonial from a man that's been there and back.

Just how insane are The Concrete Cowboys?

- Crazy enough to enter the prestigious Ponderosa Battle of the Bands as their 1st show ever, and beat out 28 other bands over the course of a month.

- Crazy enough to fly to Nashville six months after forming with a handful of CDs and knock on doors up and down Music Row.

- Crazy enough to attempt and achieve radio airplay on Portland's KUPL, the biggest country station in the state with a self-produced "demo" recorded in a marble slab warehouse.

There ain't no rookies in this band, but there's enough frenzied energy in their live show to knock a few sub woofers off the stage, so the first few rows beware: You're not dealing with normal people here.