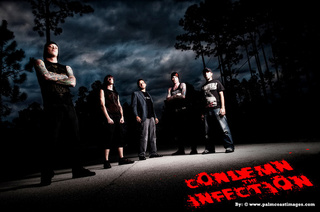 Condemn the Infection (CTI) is a 5 piece metalcore band hailing from Central Florida’s east coast with a strong following and a consistent amount of gigs booked for several months in advance. CTI’s line-up includes Dan Fedele, Francis ‘Pacey’ Abramczyk, Charles Harmer, Chris Lindsay and Aryan Roscoe. Daytona’s BackStage Pass Magazine featured CTI in their March 2010 issue with rave reviews and a huge push for metal fans to attend their shows. Currently, CTI is touring throughout the state of Florida and is in the lead for a spot at Van’s Warped Tour 2010 due to loyal fans voting everyday and spreading the word via social networking sites such as Facebook and MySpace. CTI has consistently released demos and music videos in support of their touring efforts. In additional to self-promotion, CTI has been featured in local arts & entertainment magazines, has shared the stage with Otep and has headlined many gigs throughout Florida. ‘As I Lay Dying’ has impacted and influenced CTI the most out of the many artists they love and in fact Nick Hippa, Lead-Guitarist for ‘As I Lay Dying’, actually named the band back-stage at a Concert Pacey was attending. For a band only in it’s 5th year together, CTI has some major accomplishments to add to their resume. Including the highly-acclaimed music video for ‘The Martyr’, 2 Demos and hundreds of past gigs which include such venues as New Smyrna’s ‘The Hangar’, South Daytona’s ‘Mark’s Sports Pub’ and Winter Park’s ‘The Haven’. CTI is a hard-working metal band whose long-term goal is to gain more fans, play more gigs and to find their place in large word of metaldom.

OT3P Owns the Stage by Musicallity
Several weeks ago I ran into a friend whose day-job used to be at a Café that I frequent. The Foglifter Café is where I actually met him. We hit it off because we were both musicians that were into...
Spotlight on Condemn the Infection by
Even though I exited The Haven Lounge in Winter Park sounding like Bea Arthur - that place could use better ventilation! - I am glad I suffered through the throat-killing smoke to see my new...
by
p
A
n
E
F
Song Title by Artist Name