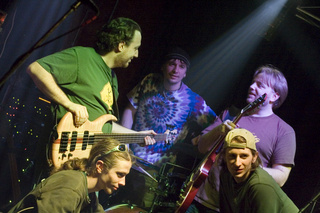 There is something about this band that is exponential. You sense the vibe right away and feel the family growing and becoming a truly beautiful thing from show to show. Covert formed in 2002, added two members in March 2003 and played a whopping 100 shows in 2006, even more in 2007 and 2008 is set to be a hallmark year. Every show is bigger and better and one can only imagine what Covert Ops will be doing next. It is the kind of thing that makes you glad you exist and helps you appreciate times of celebration. Their music is the catalyst - celebrate, dance and BE YOU!

The band is a five piece centered on a three-brother core consisting of Derek, Damon and Kedree Young. All three brothers are singer/songwriters. They grew up on Covert Road and grew up gospel! Drawing largely on three-part gospel harmony, they bring a refreshing change from the vocally challenged bands of yesterday. All three brothers play multiple instruments too, so it's not surprising to see them change things up from time to time. Its quite awesome to see how they become one on stage!

On bass guitar, Alastair Nix has impeccable talent and grooves it in to your bones. He is a large reason why people leave shows soaked from head to toe and consider Covert Ops their own personal ..weight loss program... Thankfully, Al is also very handy with the soldering iron and is a backbone of Covert Operations.

Dallas Barr is the fourth singer/songwriter in the band and has such a quirky side to it all. Dallas for the most part of the night paints pretty pictures and melts your face with his electric guitars and tone to the bone. People say Dallas is their favorite to watch..oh those facial expressions and frontal flashes!

Erik Bengston is the silent 6th member of Covert Operations and has to be the most awesome soul on planet Earth right now. During shows he is at the helm of our Sound and Light, drives the van and trailer to gigs, designs all the art and text placement on the Covert fliers and posters, and most of all REALLY CARES!

Check Out Covert Operations by
THE FLINT JOURNAL Sunday, July 10, 2005By Nikki Poisson# HOME BASE: Flint. Flushing. Brighton. Oxford. Take your pick. One thing’s for sure: Wherever this band calls home, its loyal following isn’t...
p
A
n
E
F
Song Title by Artist Name