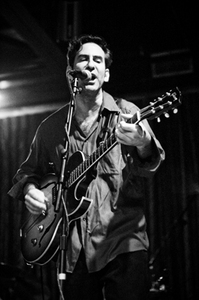 Austin artist Craig Marshall lives by a maxim: “You’re only as good as your next song.” On his sixth album and third solo release, Point of View, Marshall stands confidently in the pantheon of pop songwriting in the vain of Aimee Mann, Neil Finn and Freedy Johnston. While best known as the crooning front man and creative force behind The Lucky Strikes -- a Sinatra style swing band that predates the resurgence of the 90’s -- Marshall now emerges as prominent figure in the pop scene.
Like his preceding solo albums, the ten songs on Point of View are smart and infectiously catchy. Marshall has previously established himself as a tunesmith capable of radio-friendly pop that has caught the attention of his songwriting contemporaries. He’s penned songs for artists as diverse as Adult-Contemporary favorites The Kennedys to Austin country rock crooner, Penny Jo Pullus. More notably, Trish Murphy has recorded “I Don’t Want to Believe” on her Girls Get in Free and Tony Scalzo (Fastball) plans to record “Radio Girl.” The latter included on Point of View could be a lost cut from the film That Thing You Do.
Still, Point of View shows Marshall stretching his creative muscle. While his previous solo records boast Producers Darin Murphy and Darwin Smith respectively, here Marshall slips into the producer’s seat and clearly demonstrates that his creative ability doesn’t stop at the lyric sheet. The arrangements are succinct and appropriately lush, yet dynamic. Moreover, Marshall shows he can playfully veer from traditional arrangements and songs like “Lost in Space” and “When the Camera’s On You” seem comfortable in an approach that puts this record in line with current indi-pop albums.
Marshall’s albums boast an array of musical notables: Popular Crimes features performances from George Reiff, Tony Scalzo, Billy Harvey and Ron Flynt (20/20), and Before the Fadeaway, Trish Murphy, Kevin Lovejoy (Spoon, John Mayer). On Point of View, Marshall has honed his core band using mainstay musicians Jon Notarthomas on guitars and vocals, John Thomasson (Matt Nathanson) on the bass, and Jeff Botta on drums.
What is notably clear, in a genre bloated with stylistic imitators, is Marshall’s authentic love of song—and that he’s no frivolous wanna-be pop artist. In “When the Camera’s On You,” Marshall suggests that the camera not only catches the picture, but has unwittingly exposed the vulnerabilities of the subject as well. Similarly, Point of View reveals a deeper perspective of Marshall’s roots. His use of melodic “McCartney-esque” sensibilities is natural and inviting, and layered harmonies evoke a love of the Beach Boys and The Bee Gees. Several of his songs are reminiscent of pop music icons, yet critics have been unable to define Marshall’s sound citing artists as diverse as Richard X Heyman, Badfinger, Marshall Crenshaw and XTC. Still, despite hints of time-honored bastions, the album defies pigeon-holing and a contemporary approach in the production puts this record in line with current pop albums.
Marshall is about as prolific as any in the Austin area. Having moved to Texas from New York 1991, Marshall has been the primary songwriter for all his creative projects including the Delta Rays, The Lucky Strikes, The Waulkins and of course, his current solo career. He has been featured in Austin’s prestigious SXSW music festival and has been invited regularly to the International Pop Overthrow in LA, Chicago, New York and Liverpool, England.

by http://absolutepowerpop.blogsp
CD of the Day, 5/6/08: Craig Marshall-Point of View It's always good to see new releases from dependable power pop artists, and proof of that fact comes courtesy of none other than Craig Marshall,...
by Steve O. / Leicester Bangs
Craig Marshall - Point Of View (Big Ticket) This is a scorching power pop CD. It crackles with great songs from the get go! There are traces of Neil Finn influence at the crunchy end of his Crowded...