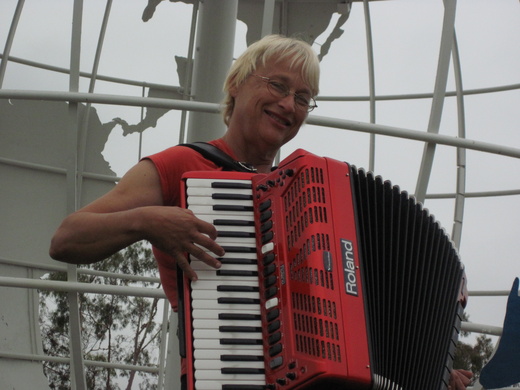 Dancetime With Linda & Roland plays music for ballroom dancing in the Los Angeles area. Okay, just Linda now, as Roland passed away October 07. Okay, I'm an "old" person but I am having fun playing music and have been doing this for a living. My clientele is "older". They stay "young" by dancing.
I am originally from Iowa. Yep, that is a 4-letter word. Still have my Iowa roots but love Seal Beach area. My music can be described as music with melody. You can humm it. It is "square" but hey, I like it and so do a lot of other people.
Oh, not only am I from the midwest but my main instrument is the accordion. Now that is different!!!! It is a Roland V accordion midi to a Ketron SD3 sound module. A whole lot of fun to play with. Yes, that is me singing. I have what some call a "sultry" voice. It is the only voice I have. Never said I was a singer. But it does work.
Love to golf, bike ride and my red convertible. Our Stage doesn't really have a genres for my music.
Check out my cd's at cdbaby.com.