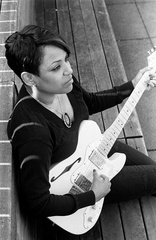 Danielia Cotton's sound is a savory dig in the early '70s, when the twin powers of rock and soul came together to form a harmonious funk that satisfied the spirit as it thrilled with slashing electric guitars. As a singer and arranger, Cotton has a refreshingly uncluttered style. Cotton brings a freshness to the soul-rock formula, not to mention a contagious fever that is near irresistible. Growing up in rural Hopewell, New Jersey, Danielia Cotton stood out. Not just because she was only one of about seven African-American children in her junior high school, but because of the compelling power of her shockingly big voice, which stopped people in their tracks from early on. Danielia’s natural gift—raw, searing vocal chops combined with a deep, buttery tone—draws from the two different rich traditions that she absorbed early in her youth. On the one hand, she couldn’t get enough of what her friends and neighbors were listening to: AC/DC, Zeppelin, the Stones. On the other, she was her mother’s girl: daughter of a jazz singer and member of the church gospel choir, grooving to Mavis Staples, Etta James, Billie and Ella. The happy collision of these two traditions is her 2008 album, Rare Child, produced by Brad Jones (Jill Sobule, Over the Rhine) and co-produced by Joe Blaney (Shawn Colvin, Soul Asylum) and Danielia herself. A major hit with critics, the sheer joy and pain she evokes in these self-penned tunes instantly draws the listener in. She pulls, stretches and grips her lyrics with a strength that is starting considering this lovely young woman’s seemingly happy-go-lucky demeanor and petite frame. Appearances asides, like male counterparts Jimi Hendrix, and Sly Stone or crossover icon Tina Turner, Danielia not only has embraced the notion of Black Rock—she has re-defined it. Her latest disc, Live Child, is a riveting, unvarnished document of her live set – a companion piece to Rare Child – that won “Best Live Album” in the 2009 Independent Music Awards. Cotton relishes her independence as well as her eclecticism: “Once you sell your soul, I think it’s very hard to get it back.” And in her songs one can indeed hear something rare: an unfettered artist singing out her life story. No sellout, just soul.

iRock Artist of the Week by Internet Warrior
Do you believe in reincarnation? After listening to this week’s iRock artist, it seems like Jimi Hendrix has been reborn 40 years later—this time as a sultry soul rocker from New Jersey. That’s...
Lubriphonic and Danielia Cotton hit Silverthorne by Erin Tracy, Summit Daily-Breckenridge
Eclectic music will be rolling off the mountains today as two bands take the stage at the Silverthorne Pavilion lawn. The concert begins at 6 p.m. with the funky sounds of roots music blended with...
Artist Spotlight by Billboard
“Blues-inflected guitars, a thick rock groove, and the New Jersey native’s big, gorgeous howl.”
"Livin' Live" Cover Story by Bliss, Pasadena Weekly
Car horns blare loudly in the background as Danielia (Dah-NEEL-yuh) Cotton talks on her cellphone while bustling through the streets of New York. She’s just finished a two-hour karate class — part...
Playlist by Jon Pareles, New York Times
Danielia CottonDanielia Cotton starts her second album, “Rare Child” (Cottontown/Adrenaline), by announcing, “I’m a little black girl who’ll rock your world,” and she sets out to do just that in an...
ABC Music Lounge on the Road: Lilith by Marié Digby
“...the [Lilith] local winner, Danielia Cotton rocked! I could hear her loud and clear from my tour bus, this lady can sing!!"
Old, New, Borrowed, Blue by Jim Fusilli, Wall Street Journal
“This is a wonderful [Lilith Fair] bill. Danielia Cotton's 2009 live set, "Live Child," showcases her straight-ahead bluesy take on folk."
Event Coverage at Sundance ASCAP Music Café by Erik Philbrook
Event Coverage at Sundance ASCAP Music CaféOn Monday, January 25, music superstar LeAnn Rimes performed a powerful set at the Sundance ASCAP Music Café. Joined by one of her longtime co-writers...
Building a Better Lilith Fair by Jon Bream, Minneapolis Star Tribune
Building a better Lilith Fair: You pick the lineupPosted by Jon BreamLast update: July 16, 2010Lots of people are griping about the Lilith Fair lineup for Target Center on Sunday. Here’s your...
p
A
n
E
F
Song Title by Artist Name