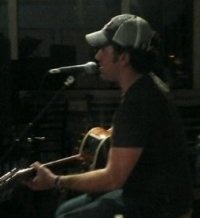 Dann Russo pours rock, blues, country, gospel and every other type of real down-home music into his performance like the sweat that pours from his brow. He doesn't strum - he beats his guitar, wrenching emotion out of it. He doesn't sing - he energizes crowds with his sometimes gruff, sometimes gravelly, sometimes sweet voice. Dann also serves as the inspiration for the character Theo Christmas in the upcoming Penguin/Putnam release "Models Don't Eat Chocolate Cookies" by Erin Dionne and the book includes lyrics and mentions of "Ruby Red Hair" and "Dreaming Without You" (both available for download at this site. Both live in Boston and NYC among other places and in the studio, Dann is a force to be reckoned with, a "soon to be phenomenon" (NorthEast In-Tune Magazine) with "rock-and-roll abandon" (Newark, NJ Star-Ledger). As "Dann Numbers" on the wildly popular world of "Second Life" (http://www.secondife.com) Dann has become one of the more popular acts in-world, complete with over-filling venues and crashing servers! These shows' locations are listed as "other" on the calendar at http://www.sonicbids.com/dannrusso and are Pacific Time, streaming from the confines of his basement to computer speakers around the world.

as a solo artist, just a mic (preferably with straight stand)

Dann Russo & The Whisky by whiskyfun.com
this ‘whisky’ is a very good one, authentic and natural (that is to say acoustic), powerful (that is to say full of passion and energy) and also complex (catchy yet intelligent, folksy yet modern,...
Dann Numbers/Russo Rocks! by Acoustic Pie
I know I always joke that I got tired of rock music in the '80s. But Dann Numbers is a serious Second Life rocker with an acoustic sound whose music I find irresistable!I think I can guarantee that...
p
A
n
E
F
Song Title by Artist Name