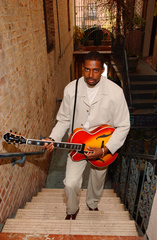 This California native possesses a combination of contemporary and progressive guitar styling that are distinctly unique creating a blend of R&B and Jazz. Darryl has been formally trained in music and guitar theory for several years. Darryl has 2 Independent CDs on the market ,entitled "ELEMENTS" and "RYTHYM CARNIVAL" one song from the " RYTHYM CARNIVAL" project ("Soul Serenade") in 2005 was the theme song for The TIM GARRISON Radio Show, 107.5 THE OASIS in Dallas Tx. Darryl performed with @ the time e2Records/Sanctuary Urban Records' R&B sensation JON B, at an Humanitarian Concert (L.A. Cal.) to help raise money for victims of the Tsunami and a USO Tour for Camp Foster in Okinawa Japan (October 2006). Darryl has performed in Theater as afore mentioned, May 2004 he played guitar in a play/musical written by Micheal Ajakwe jr,entitled "IF YOU DON'T BELIEVE : A Love Story" (featuring names such as) Deniece Williams (winner of 4 Grammy, 3 Stella Awards,1 Oscar Nomination, 1 American Music Award and 1 Tokyo Music Award),Tatyana Ali, from the hit Sit Com (THE FRESH PRINCE OF BEL AIR) to name just a couple from that cast. The play/musical went on to recieved 8 NAACP award nominations. Darryl is a guitarist who has played for/with several prominent artists, such as Stevie Wonder, Gerald Albright, and Grammy Award winning Producer Andre Young aka Dr. Dre... 2002-2004 Darryl peforming with "The Noe Soul Crusaders"band provided the music behind the ..Neo Soul Unplugged.. series for Via Com, the series featured such notable artists as Chico Debarge, Amel Larrieux, Jon B, Shante.. Moore and Kenny Latimore. Darryl performed at the 2001 Pasadena Promotional Jazz Concert series for the Playboy Jazz Festival, and performed for the NAACP with various prominent politicians in attendance. Darryl opened for Jeffrey Osborne at the Hollywood Cal House of Blues in 1999 and preformed with UnderLake who opened for Joe Sample in Hawaii in 1998. In addition Darryl has headlined in LA..s top Jazz clubs such as the Atlas Supper Club, Conga Room, Luna Park, Key Club, Knitting Factory and
The A. D. Club. "D" (as known by his peers) laid the guitar track on the BET (Black Entertainment Television) Comedy Hour theme song 1997. This talented musician has also been a model featured in various Los Angeles and Las Vegas fashion productions. As a songwriter, ..D.. has collaborated with prominent industry names such as Wanda Hutchinson of the Emotions, Singer/Songwriter/Producer Donald Tavie and worked with Norman Conners, Marion Meadows, Wayne Vaughn, Gerald Albright, Chuckii Booker and a host of others.
Darryl Spencer is undeniably one of the most talented and promising Guitarists/Song Writters/ Producers in the Business!
p
A
n
E
F
Song Title by Artist Name