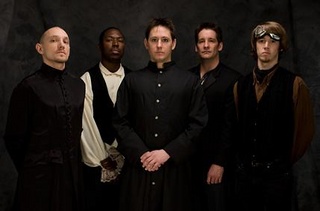 What began as a solo studio project by award-winning songwriter Adrian James – known from his work as designer and violinist of Evanescence – has blossomed into a vibrant live act called "Das Gift." Defying classification, the music lurks in the spaces between alternative, progressive and Darkwave genres, drawing comparisons with psychotropic acts like Tool, as well as Pink Floyd. Independently released in 2007, the pensive debut "Das Gift" (German for 'The Poison') is an elaborate 14-year endeavor with bilingual lyrics, odd meters, and eclectic instrumentation – from piano to electric mandocello and violin. James points to early albums by Siouxsie and the Banshees and the Cure's as inspiration for the pounding tribal drums and pipe organ. Smooth vocal melodies and touching piano ballads are woven through the symphonic album. Rising from the material are the singles, “Perfect Song,” “Beautiful Womyn,” and the Top Ten placing "Killing Jar." (Indie International Songwriters Competition 2008; OurStage - Gothic/Industrial Sept. and Nov. 2008) Alternating between guitar, bass, keyboard and even drums, James maintains his trademark emotional vocal delivery for the band's live shows. Also rotating instruments during on stage, Robert Dickey appears on bass, lead guitar and backing vocals. Taran Ware performs the band's signature pounding percussion and adds backing vocals. After recent concerts accompanied by a string ensemble, Jeff Strain (upright and 7-string bass, keyboard) and Dwight Denman (cello) are continuing with the band as a full-time lagniappe. Headlining the 2008 Halloween Cover-up (Little Rock, Arkansas), the band debuted a full set of Pink Floyd songs, which promises to carry over into future studio endeavors and live shows. With a growing international following – especially in the regional Darkwave and Steampunk communities – the band is based in Little Rock, Arkansas, and available for booking with a 1.5 hour set. The show usually features interpretations of the band's musical influences , including the songs of The Cure, Pink Floyd, Radiohead, Nine Inch Nails and Depeche Mode. The band is currently mixing a 19-track Pink Floyd tribute, complete with string ensemble, sitar and kid choir. The CD is up for pre-order and is due this fall.

Triply More Interesting Than [Evanescence]... by Virus Magazine, Germany
...”Das Gift” offers something surprisingly different. More sonically akin to the work of dark psychotropic acts like Tool, James’ creations are neither pop nor metal, but instead something...
One of the better albums I have heard... by Gothic Beauty Magazine, USA
...in some time now, and that is no exaggeration...WELL worth the wait. Das Gift features rich and meticulously arranged layers of sounds ranging from acoustic, electric, synthesized and exotic,...
The Next Pink Floyd... by Malice Radio, Pennsylvania
...I was transfixed through the entire album…It was at some point in [I’ll Never Leave] that I started to cry.
Emotionally Penetrating... by Morbid Outlook, New York
Only a really anthracite soul would fail to be touched…by this heart-wrenching material.
Das Gift Is a Blessing... by American Gothique, Alaska
an amazing journey of sound...musical structure, and lyrics worthy of a Triple Platinum. It's become my wife's Number One CD.
Remarkably Realized Vision... by Localist Magazine, Arkansas
you wouldn't expect it to be the brainchild of just one person...sounds more like a symphony in several movements than a collection of individual songs…sneaks up on you and ingratiates itself
For a band dressed in all black... by Sync Magazine, Arkansas
...on a 98-degree day, Das Gift is actually a fun-loving bunch… Das Gift is fighting against the mundane music that populates the FM dial.
Eclipse of the Moon | Das Gift: "Any Cover You Like" a Pink Floyd Tribute by Arkansas Entertainment Beat
I remember the first time a copy of Adrian James’s Das Gift was laid in my hand back in 2006. The package of the album alone amazed me. The outer wrapping had a sticker that read “ A Dark &...