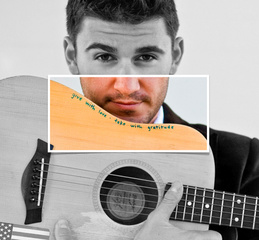 Click to Edit“I’ve been relying on your pretty face, The sweet aroma on my pillow case. I’m stealing samples of your good shampoo, So I can duplicate the smell of you.” - “All My Love” from Datcho Willy Stealing shampoo isn’t all Dave Booda is doing these days. Only a few years away from finishing his five year commitment to the Navy, Dave has committed himself to work as hard as he can to prepare for the life of a full time touring musician. Before we tell you more about the music… let’s back up a few years. In 2001 Dave was accepted to the U.S. Naval Academy and left his home in Boston to enjoy Annapolis, Maryland. Not typically known for developing musicians, the Naval Academy served as an unlikely catalyst for Dave’s career in music. Sounds crazy, right? While at the Academy, Dave managed to work in as many as 6 or 7 solo acoustic gigs a month at the local bars, and served as the front man for the Harper Collins Band, a group that quickly became known for it’s rowdy live shows and packed venues. After graduation, his band mates went to all corners of the world and Dave got stationed on the USS PELELIU (LHA-5) in San Diego, a town known for its homegrown music. Quickly finding himself immersed in the music scene, Dave shifted gears from the bars to live music venues. John Ciccolella, owner and manager of Twiggs, a venue that has long been home to San Diego musicians such as Jason Mraz and Bushwalla had this to say about Dave. “An excellent voice and intelligent, sometimes humorous lyric content puts Dave in the "must see" category of singer/songwriters. Although he never let's on, I was surprised to learn that Dave is a Naval Academy graduate; this is perhaps his second greatest achievement.” Fueled by the hype he was generating in San Diego and on the internet, Dave began touring, still managing a full-time commitment to the Navy. Since 2005 Dave has performed in 20 different states and has played hundreds of shows, including a few overseas. In between duties at sea and touring, Dave recently finished his latest recording, a 5-song EP entitled “Datcho Willy”. Mixing the rhythms of Jack Johnson and the voice of soul singers like Lionel Richie and Stevie Wonder, Dave joins the new era of singer/songwriters known for “acoustic soul”. His song “All My Love”, a slow soulful ballad and the first track on “Datcho Willy” showcases this new style and recently reached 3 (out of 869 entries) on the ourstage.com singer/songwriter charts. Joined by a group of friends and fans that would make any musician jealous, Dave and his team have been spreading his music and generating buzz around the country. Known for his absolute dedication to every fan, Dave has earned his reputation by returning every single email, facebook and myspace message he’s ever got, and then some. Don’t believe us? Try him.

One DI, one vocal mic.

Must See Catergory by John Ciccolella, Twiggs in SD
“Dave Booda, a low key, mild mannered gentleman brings a fresh and interesting approach to the acoustic music scene. His hard-hitting guitar playing tempered by strong melodic overtones, an...
Professional as he is Personal by Anthony Tran, UCSD
Dave Booda is a promising singer songwriter that puts on a captivating and interactive performance. Armed with a six string guitar, Dave produces a unique and accessible sound that keeps his fan...
p
A
n
E
F
Song Title by Artist Name