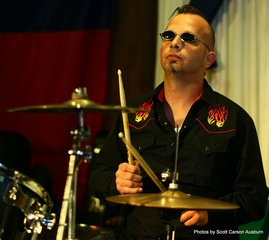 Shiner Bock Rising Star Final Oct. 2007 by TSJ Press
I've been to Nashviile. I've been to New York. I've been in LA. I've never heard anything quite like this...wonderful and unique." --Janie Fricke, country music star and SHINER BOCK Rising Star...
Personal testimony by Dave's memory
I've never heard a drummer that can start and stop like you. Wow." --Dan Baird, commenting on Dave's playing during the recording of the TRUCKSTOP JUNKIES debut album, December 2007. Dan produced...
Personal testimony by Dave's memory
Man, you effed the s**t outta those drums." --Reggie Las Vegas of NED VAN GO, after watching a set Dave played with TRUCKSTOP JUNKIES
TRUCKSTOP JUNKIES at Adair's by LIT Monthly
Last month the Truck Stop Junkies rolled into Adair’s. It was a trainwreck. They are talented musicians.The songs were good. I love bands that move around, dance and go crazy on stage. However, the...
3 Records by Dan Baird's MySpace blog
The 1st of the 3 records I worked on is a band out of Texas that Joshua Jones at the Range 95.3 FM in Dallas threw my way that won his "don't dare call this a battle of the bands" contest last...
Personal testimony by Dave's memory
I get excited watching him play. And man, can he eat like a pig." --Eva Beavers, personal chef and COO of the HOME AND PARTY CHEF, a culinary specialty provider
Personal testimony by Dave's memory
I've played with lots of musicians over the years. I've never played with a drummer with as much passion as you have. You wear your heart on your sleeve. I have a blast just watching you play. And...
Letter from a TSJ fan to LIT MONTHLY by LIT MONTHLY, June 2008
I disagree with your assessment of the Truckstop Junkies in your latest (May 2008) issue. They are wonderful people and artists, and as far as your opinion goes on their over rehearsed cheap act;...
Shiner Bock Rising Star final 2007 by Dave's memory
You are a great drummer. I like your style very much.--Janie Fricke, country music artist and legend, mentioned to Dave after their final contest performance, which TRUCKSTOP JUNKIES won for 2007
THE MARFALITES at LaGrange by DC9 at Night
These guys are the real deal! They are my new favorite band in Dallas. Why have I never heard of them before??--Pete Freeman, Dallas Observer, January 2010
p
A
n
E
F
Song Title by Artist Name