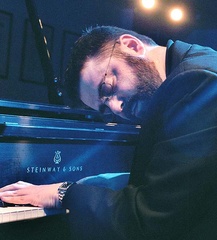 A native of the Pacific Northwest Dave Peck is known for his thoughtful, introspective style and rich harmonic coloring. His award winning CD’s (Trio, Solo, 3 and 1, Out of Seattle and Good Road) are featured on terrestrial, satellite and internet jazz radio. He has been on Marian McPartland’s Piano Jazz, PRI Jazz After Hours and NPR Jazz Alive. His collaboration with saxophonist Bud Shank includes Tales of the Pilot Bud Shank plays the music of David Peck, Live at Jazz Alley, Tomorrow's Rainbow and The Lost Cathedral. He has also performed with some of the great jazz artists of our time including Chet Baker, Joe Williams, and Freddie Hubbard. Coda Magazine calls him“…introspective and astute…lush and deeply attentive…warm, adept and perfectly subtle with enormous craft” and Downbeat Magazine says his playing is “lyrical and pastel, swinging and bluesy, with a ringing crystalline touch.”

Dave Peck/Pilot's Return DOWNBEAT Magazine by DOWNBEAT Magazine
I'm the person and the player I am because of the community I have here," said Seattle pianist Dave Peck. "Back in the '70s, I might have thought about moving to New York. But when I started being...
p
A
n
E
F
Song Title by Artist Name