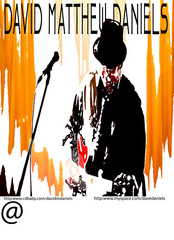 In the traditions of great Americana artists like Leonard Cohen, Elliot Smith, Tom Waits, and Bob Dylan, to name a few, David Matthew Daniels crosses the boundries of genre and style to create a hauntingly familiar yet unique musical sound. Daniels has been performing in little known punk clubs, biker bars, coffee shops, and even the occassional laundrymat across the west for the past ten years with acts that ranged from punk to blues to rockabilly and anything that the audience demanded at a show. Now Daniels is branching out on a solo show, promoting his own unique take on electric folk and roll. Imagine if Woody Guthrie had learned to play from listening to Can, Primus, Joe Pass, Pink Floyd, and Jimi Hendrix, and you might get a feel for Daniels. Essentially it's a folk act on psychadelics. Muloch is his second self released album, after the short run, but dearly loved Antique Porn, released in 2003. Look for Daniels at some shady club somewhere close by, and give him a good “Argle Bargle” when you see him.