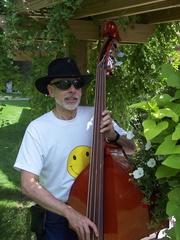 Dave was a teenage weekend warrior at N.Y.'s Greenwich Village's Circle in Washington Square, Bitter End Coffeehouse, listening to WBAI radio. With roots in American & British Rock, International Folk, Broadway, Eastern European Klezmer, Clazzical, Southern Gospel, and Humor/Parody, he writes and arranges for pleasure, purpose and profit, and performs vocally and on keyboard and upright bass. Always looking for new musical challenges and music business contacts, he has a good feel for the serious as well a comic. Dave is open to musical projects. He's reaching out to indie movie producers, theatrical producers, and publishers in his current goals, respectively, of scoring a movie, writing additional music for theater productions, and having his songs placed with nationally prominent successful vocalists.

"Muse" Trumps Songwriter's Block by David Waldman
The lyrics of "Muse" beautifully highlight the struggle and eventual triumph that songwriters encounter all over the world to allow the lyrics and music of their songs to flow of their own accord....
"It's All Up to Me" Promotes World Peace by David Waldman
It's All Up to Me" is a peace song - a blueprint for promoting international peace between nations. It's a song of personal responsibility for working on oneself in order to promote peace.
"Free" is Empowering by David Waldman
The lyrics of "Free" advocate for hard work and prayer to counter adverse life experiences, charitable treatment of others, tolerance for differences of beliefs, optimism, self-defined self-worth,...
"Hine Ma Tov" - How Good It Is! by David Waldman
A Hip Hop take on a timeless wish -- Wouldn't it be far out if people could live in harmony?
"Michigan Spring Flowers 2010" -- New Video, Photos by Stuart Frohm of Midland, MI. Original Music by David M. Waldman
Photos by Stuart Frohm of Midland, MI.Original Music by David M. Waldman of Essexville, MI.Photos shot in Midland MI and Holland, MIMusic composed and arranged by David M. WaldmanPhotos copyright...
"Conscripted Klezmorim" by David Waldman
Conscripted Klezmorim" is an experimental piece that paints a picture of a small band of klezmer musicians being forced to a man to fight on the front lines in another senseless war.
"Dumbing It Down" Highlights Integrity by David Waldman
“Dumbing it Down” highlights the songwriter's need for authenticity and integrity in song composition, an ideal difficult to achieve the more commercial the interests of the songwriter. The lyrics...
p
A
n
E
F
Song Title by Artist Name