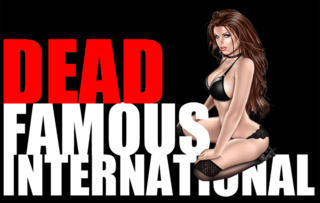 DEAD Famous Artists - Who We Are

Dead Famous Artists International is a brand new, forward thinking label with its head office in Australia and affiliates set up in the US, UK and Europe, that continues to evolve with current trends and changes in today's "wired" marketplace. We have a great roster of artists that are both proactive and making waves on stages all across the world by having visibility through touring consistently and getting their material licensed into various media platforms like film, TV and advertising by both management and the label.

Dead Famous Artists International delivers groundbreaking new artists, a comprehensive catalogue of our artists' latest creative vision, as well as analysis on current and future trends in the ever changing face of the music industry, all designed to complement our offline efforts to push our music, licensing, publishing, and worldwide distribution network in a cooler, laidback 24/7 environment.

Dead Famous Artists International identify with all musicians because every single member of the DEAD Famous family is a musician themself. We also produce a bi-monthly compilation that spotlights some of the best new talent currently found on the planet. To help with this effort we have enlisted the support of our very good friends at Sonicbids.com, IACMusic.com and Entertainment Inc. To listen to some of our compilations, please check out our compilations page, where you can not only listen to every track on every compilation we've ever produced, but also grab any single track or tracks you like and put them in your shopping cart!

Dead Famous Artists Events are where artists and fans COME TOGETHER to connect in a simple environment that means something. We create a fun atmosphere by bringing together industry heavyweights, viral technologies, and current entertainment industry professionals, as well as fans and our artists to discuss and debate today’s most critical issues and trends in the evolution of the music today. Added to this is the stamp of leadership and objectivity that only the International Brand that is Dead Famous Artists can bring, resulting in the ideal melting pot for building even cooler personal relationships between artists and their all important fans...because WITHOUT their fans the artists are nothing!

How do we secure the confidence of our artists?

Let us tell you a brief story of facts first. It’s no surprise to anyone working in the game today that the industry is in a state of flux and in the process of imploding on itself. Coupled with the fact that I Tunes has announced that it will make its entire catalogue available for FREE to the public domain on a paid subscription basis only and will also introduce a policy where artists will pay a holding fee to have their content hosted. If you don’t pay your holding fee then your content will simply disappear from the grid until you do. The other thing to note is that Universal, Warners and Sony/BMG have all walked away from the digital giant and formed a strategic alliance with MY Space for all their new releases. Why, because My Space already has millions of dollars committed to branded advertising and this means that major labels now have a captive audience to market to. What does this mean to the two bit artist going nowhere fast and the label that believes in them? It means that music as we know it today isn’t worth a cracker and to even think to try and compete with the traditional model created by the Majors is a foolhardy exercise at best. There is a solution and it’s all about effective viral marketing. We offer the artist these immediate benefits by signing their product with us.

1. The inclusion of their three best songs in a non exclusive licensing deal to feature the tracks in the recut of the (52) x (26) min episodes of Not Recommended Behaviour which will be now known as DEAD Famous “LIVE” which used to broadcast in (56) countries around the world and had a reach of over 200 million people worldwide. The band will receive a top and tail credit on the extreme sports clip it is featured on as well as closing credits which will also feature there My Space URL. Here is a vehicle that creates immediate viral exposure and stimulates market visibility.

2. The incorporation of the bands two best songs on two consecutive DEAD Famous Artist Compilations which are physically distributed in Australia & New Zealand by MGM and sold for $10.99 of which on a pro rata share split between 12 artists on each CD is 12% of the return. Money for Jam at best…Yes, but vital pre-release exposure to help stimulate the street date for the album. The CD’s are digitally distributed worldwide including all I Tunes and other mainstay retail platforms at the same 12% split on a pro rata basis to the artists.

3. As we are effectively involved with the higher Hollywood community as music supervisors on various feature film productions. We can offer our artists first look at being included in any of these projects and their encompassing soundtracks. Most of these soundtracks are distributed by Majors and therefore as a rule of thumb if an artist hits the ground running with a track in a box office success, then chances are the label will reach out to them on discovery that they have a full blown album waiting in the wings ready to go. This is how mainstream exposure is created and subsequently capitalised on.

4. All DEAD Famous Artists are given the opportunity to align their back catalogue of material under an exclusive licensing deal we have with Teletunez / Warner Bros Television (W.B) where we simply make their material readily available to some (46) music supervisors to draw the material down for TV cues as they need it each week. The cue sheets are logged and forwarded on to the various royalty collection agency's around the world for collection. Its a 50/50 deal so the artist makes income from the licensing and gets cut a cheque when they least expect it. So far we have made available a pol of over 120 plus songs to the platform and this is growing every week.

Our current roster of artists include:

New Self High - CD Release by Radar Music (Germany)
… With Love and Scars" 2000 could already have rauskommen, when many new Metal sizes on their zenith were, and millions of CD sold. Thus I do not want to say that NEWSELFHIGH afterwards-tumble to...
Biggleswade Chronicle (Fyrefly) by Biggleswade Chronicle
Langford band celebrates more success in USAA Mid Beds band's ascent of one of America's top charts has reached new heights after notching up another top ten hit.Indie rock group Fyrefly are...
The King of All Badasses by Destroy All Records
In an age where rock music is being replaced with tags such as neu-metal, emo and gothic it is a genuine treat when someone turns around and sticks two fingers up and screams ‘fuck you, I’m doing...
Dave Evans - Sinner Review by Gorezone
Tracklist: 01. Back On The Firing Line, 02. Rock 'n' Roll Or Bust, 03. Take Me Down Again, 04. Only The Good Die Young, 05. Sinner, 06. Carnal Knowledge, 07. Turn It Up, 08. Out In The Cold, 09. Go...
New Self High - Higher Still by The Eagle Eye Paper
“Deroot….Deroot...Deroot….Deroot….This is my family.” Those were the words on almost all Deroot fans lips. But now Deroot is no more, after Rob Mulligan and Ryan Thompson split off from the bassist...
Every Mothers Nightmare by Autona Media (Cologne)
Kettensägen und Plateaus, das Skurille der 70er und der Wahnwitz der Moderne, die Genialität der Einfachheit und die Einfachheit zum Spaß an der Freude am Rock'n'Roll. Damnzal aus dem Land der...
Stay In The Box Review (Janice Doll) by Stay In The Box
Janice Doll - London PleaseDon’t be fooled by the name, Janice Doll are four Brazilian lads, who have come together to create some riotous noise. A wall of guitars meet soaring anthemic vocals in...
Dave Evans Rocks - Attitude of Life by All Access Magazine
As the original singer of Australia’s most legendary rock band, Dave Evans will forever hold a spot in the rock and roll hall of fame. This is not only because of his pilot position of the...
New Self High CD Review by Powermetal.de
NEWSELFHIGH ist eine neue Band aus dem US-Bundesstaat Florida, deren Erstling "...With Love And Scars", den sie selbst co-produziert hat, schon vor einiger Zeit auf ihrem heimischen Markt...
Heavy Duty Artillery - The Vaine by Rock Eyes Magazine
The eclectic incarnation of harsh and melodic vocals, make THE VAINE standout amongst others. Shell with hardcore screams and Clik with a smooth melodic voice is a match made in heaven. THE VAINE...