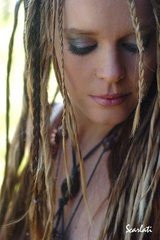 DEANNA'S BIO With her musical roots drenched in the swamps of the south, Deanna Johnston's raw soul first emerged out of a snowy farm in ON, Canada, where she grew up with her Mom, Dad and her 3 sisters. Searching for a city to compliment her both musically and spiritually, she finally ended up at the fertile intersection where country music crosses into southern rock, Nashville, Tennessee. Deanna has been to the Nashville music scene what Janis Joplin was to San Francisco in the late 60s; a poignant reminder of a woman born to perform, who lives the autobiography of her life each night on stage. Her vocal style has no parallels. It is pure & powerful, subtle in its beauty & rich in character, bringing a soul-blues, down home flavor to her original music. Sitting on the edge of country, behind the tinge of an acoustic guitar, b3, dobro, & the simple lyrical honesty of her songs & her stripped down acoustic melodies, hold us all spellbound to her powerful performances & true originality. A singer with a voice both contemporary & classic at the same time. Deanna's music inspires & truly stirs the soul with each note & every emotional high & low of life she shares with those who listen to her. She has a way of emotionally connecting to her fans & closing the distance from the stage to the crowd, to a space closer & more intimate than any other performing artist in America today. Deanna has performed all over the world & in and out of our living rooms. Dave Navarro once said, "you have the voice of a lion", as she gained worldwide notoriety for her stunning performances on CBS's hit TV show RockStar:INXS as well as on NBC's The Singing Bee. She has shared the stage with talents such as Kelly Clarkson, Chaka Khan, John Rich to name a few, & the chance to perform for Oprah Winfrey was yet another pivotal moment. Deanna Johnston's intensely personal songs are the anthems we share, of hope, life, & everyday experiences woven into rustic Americana. In her sound the listener hears the cornfields of Tennessee, the weathered barns of the Carolinas, the chilly groans of the North, the wishes & dreams of love gone right & love gone wrong. Wherever Deanna's musical journey leads her, the rest of us can only be thankful that she's invited us along for the ride.