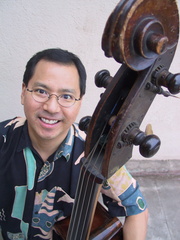 Now a highly regarded studio and freelance musician, Dean Taba began his musical studies on the piano at the age of 6 and played french horn in the Hawaii Youth Symphony. It was a desire to play in the high school jazz band that introduced him to the bass and improvised music. After extensive studies at the Berklee College of Music in Boston and a refinement of his skills on both the acoustic and electric bass, Dean relocated in 1984 to Los Angeles to become one of it's most in demand musicians.

"More Is More" by
L.A. Jazz Scene - "Bassist Dean Taba has made quite an impression on the L.A. Jazz scene in a decade of straight-ahead gigs with the best and brightest of our local artists. His walking bass leads...
"For Friends" by
Double Bassist Magazine -Hawaiian bass virtuoso and veteran A-list West Coast session player Dean Taba here presents a disc that is so moreish I found myself singing the tunes (solos included) all...
"The Camarillo Waltz" by
Star Bulletin - Dean Taba lays out his credentials as a modern jazz traditionalist with this collection of 10 original instrumentals. Taba can play the electric bass guitar, but his use of acoustic...