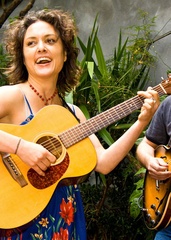 Crooks pours stiff shots of brains, soul and guts into her compositions...."-Flavorpill

Singing about faith, love and loss, Deborah is an intimate and edgy artist whose work is dedicated to peace and the process of liberation. Widely published as an essayist and journalist, her lyric-writing skills honed by a lifetime of writing, world travel and study of yoga and Buddhism.

The Santa Cruz native released her first EP "5 Acres" in 2003, tunes from which were included on compilation CDs (RockerGirl & Mosquito Media). Informed by a return to her native California, "Turn It All Red" is an even more personal work, drawing on equal parts rock and roll, Americana and the songwriter tradition.

Deborah showcased at the 2006 Millenium Music Conference, the 2005 RockerGirl Magazine Music Convention, in Austin, TX, and was a featured performer at the 2007 Harmony Festival. She also appeared at the Grey Eagle in Asheville, NC, Arlene's Grocery in New York and the Knitting Factory in Los Angeles and is an active member of the San Francisco Bay Area songwriter and arts community.