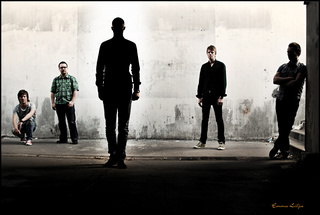 A bit about us... Welcome to the band that was founded on the top floor of Sweden’s tallest building - Turning Torso! In the late 2005 Andreas and Hans met at the university where they both were studying. They both knew about each others musician past, and plans were made starting a band. Soon they got together along with Johan and Daniel. For about 1.5 year they were writing and rehearsing with Andreas and Hans as the bands lead singers. Though not fully satisfied with their lineup they soon recruited Markus as their new lead singer. Since then the band has focused on creating songs with strong and catchy melodies. The result of this can be heard right now playing in the background. So we hope you will enjoy our music just as much as we do, and maybe even more, and don’t be afraid to leave a comment!

Songbox Review by www.songbox.net
Song: Its Over Now; Reviewer: Anders Tegnér 2009-02-21 Review: Skitbra låt och jättebra spelat! Gillar detta mycket. Keep it up! In english: Great song and great played! Like this much! Keep it up!...
Meadow Music by www.meadowmusic.se
dePhaser went for the top right from the beginning. That is, they were formed on the top flor in Turning Torso in Malmö, Sweden. They rehearsed and wrote songs for a year or so, but they didn’t...
p
A
n
E
F
Song Title by Artist Name