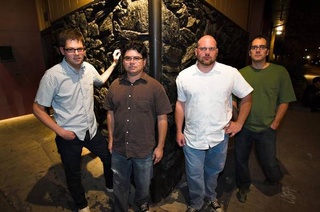 Desario is indie pop superheroes John Conley, Mike Yoas, Jim Rivas and Mike Carr. Their members have been in many well-established and popular Sacramento area indie pop bands including The California Oranges, Holiday Flyer, The Sinking Ships and Rocketship.

Formed with the idea of playing edgier indie rock along the lines of the Pixies, Desario cannot escape their poppy, melodic roots. You don’t have to listen too hard to pick up traces of Echo and the Bunnymen, Interpol, Lush, The Clash, The Church, The Cure, The Walkmen, The Stone Roses, Doves or The Jesus and Mary Chain.

We have completed our first full length album, Zero Point Zero, which will be out on Darla Records at the beginning of 2009.