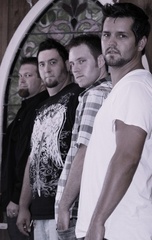 Who says rock can't be beautiful? Fans often say they are "blown away by the vocals." The Southeast Missourian wrote: "This St. Louis band has perfected the alt-rock ballad." Descending New Angels blends an alternative southern rock style with a generous amount of blues and a pinch of grunge, a sub-genre fans are describing as "blunge rock." The interplay between acoustic and electric guitars throughout all their songs has drawn them comparisons to 3 Doors Down. Descending New Angels released their self-titled album in August 2009. A few weeks later, they played at the TOCO Music Festival, an annual fundraiser for Make-A-Wish-Foundation. A radio program director noticed their performance and asked for a CD. Soon after, KDHX 88.1FM began airing 4 of the songs from the album and asked Descending New Angels to come in for live performance, which aired Oct 14. During the interview, host Dan Kinney likened Shanks' style to that of Warren Haynes of Gov't Mule. This live radio performance and interview can be heard at: http://www.bit.ly/KDHX-DNA Others parallels have also been drawn to the talents of Pearl Jam and Nickelback. With over 175+ live stage shows at top venues in St. Louis and along the Mississippi corridor, Descending New Angels has developed a stage presence and comfort level for larger audiences. DNA is excited to be in the line up for the band's largest event so far--the St. Louis 2010 Soulard Mardi Gras in February--the 2nd largest Mardi Gras event in the USA. Descending New Angels rooted in 1999 when Randy Shanks & Erik Simpson began blending poetry into acoustical melodies. The duo quietly perfected dozens of songs before performing acoustically at parties and venues and finally becoming a full band in 2007. The band distributed demo CDs that even generated interest abroad with requests to air on radioultra.ru (Russia),TWINCITIESFM.COM.AU (Australia) and IChannel.FM. Using the internet, DNA continues steadily building a fanbase. The sweet and salty contrast of Simpson's melodic riffs and Shanks' bluesy bends tantalizes the ear. Simpson romances the strings of your heart as he picks his acoustic guitar. With crisp rhythmic precision, Keith Thurnau drums in rolling waves that rock you into an altered state. Mike Titchenal adds a smooth bass undertone. Perhaps it's the mix of European and earthy Native American genes that add the dimensions so many fans say 'grab them.'. All we know is this recipe whips acoustic and electric together into a richness that sits atop layered rhythmic beats and bass, like a 'slice of pie' you just can't resist! There is no doubt about their passion, discipline or attention to detail, as the intricacies of their sound floods your senses. Influences include Pearl Jam, Sound Garden, Staind, 3 Doors Down, Nickelback, Nirvana, Stevie Ray Vaughn, Blues Traveler.