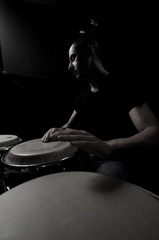 Bravely fusing a variety of musical styles -- world music, acid jazz, rap -- within a pop framework, Seattle, WA-based Diano Garcia represents the new face of rock & roll wherein geographic boundaries and genre conventions are tossed to the wind. Garcia's new album, Turn It On, has received rave reviews from music critics for its infectious, wildly eclectic view of pop music, from the African backbeats of "Vows" to the driving hip-hop of "Soap Box." Writer Kyrby Raine described Garcia as, "Imagine if James Brown had appeared now and instead of the ’60s," in Shotgun Reviews. U.K. critic Adam Harrington of Whisperin & Hollerin praised Garcia for his ability to "stitch together the overlapping genres with funky pop hooks...This is the Top-40 music of the future, when different cultural backgrounds melt into a multi-layered single unit." Another British writer, Review Centre's Barry Andrews, raved that "Garcia is peering into an exciting possible future when music can no longer be categorized."

A veteran of Seattle's diverse independent scene, Garcia studied African and Latin percussion for several years before writing for and touring internationally with his first project, Riveroots. Shortly thereafter, he collaborated with guitarist Marcos DeFluri and vocalist Paula Geroux in the dance combo, Phat Bagg. That led to Garcia and DeFluri teaming up for Ancestor Radio and performing over 300 shows of scorching funk, rock, hip-hop, and jazz. Turn It On presents Garcia as a solo artist, letting loose his background in global pop music and his passion for the ultimate groove.

Afro-Beat Makeover for Emerald City by Fear of a Rap Planet
When it comes to Seattle hip-hop, there is Sir Mix-A-Lot and honestly nothing else if you’re talking about national recognition. For a city that dominated mainstream music in the ’90s with its...
Diano Garcia - "Turn It On" by ShotgunReviews.com
With its big, shuffling beats; jazzy, sultry horns and trumpets; snapping hip-hop rhythms; toe-tapping synthesizers; and even some cool, laid-back rapping, Turn It On is a full-tilt party album....
GARCIA, DIANO 'Turn It On' by Whisperin & Hollerin
Genre: 'Pop' - Release Date: '2007' Our Rating: 9 Stars (out of 10) Diano Garcia (http://www.dianogarcia.com) is a little bit acid jazz. A little bit world music. A little bit hip-hop. OK, what the...
DIANO GARCIA BUSTS ALL RULES by Fear Of A Rap Planet
Reviewed by Howie MitchellDiano Garcia/Turn It OnDo you want to hear the future of hip-hop? While thousands of rappers, on major labels or out of them, are recycling the same shuffling rhythms and...