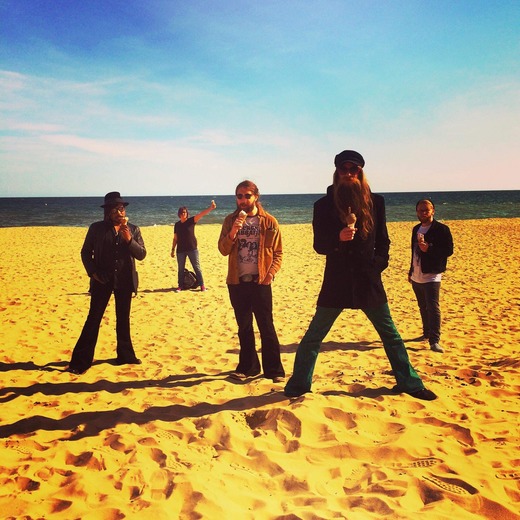 The Recks are a gypsy, jazz, folk, funk, genre-bending, mind-melting, slap-dashing, five-piece from the Isle of Sark in the Channel Islands.
Formed in 2012, The Recks quickly gained positive reviews and became known as the “kings of schizophrenic folk” appearing at festivals such as Board Masters, Isle of Wight Festival and Boomtown Fair.
Releasing their long awaited album, The Beast From The Sea in June 2018, The Recks have been riding a wave of success, culminating in an appearance on the BBC Introducing Stage at Latitude Festival; a raucous performance that earned them airtime on The Late Junction on BBC Radio 3, Bethan Elfyn on Radio Cymru and Huw Stephens show on BBC World Service. The Recks returned to the BBC a few months later to perform a rare acoustic show at BBC Music Introducing Live 2018 for Sentric Music Publishing.
As well as performing many local shows and festivals in the Channel Islands, 2019 has seen The Recks embark on a successful ten show tour in the South of England, support up and coming band ‘King Nun’, perform at Beautiful Days Festival, packing out the Big Top Stage and play three unique shows in Sweden at the INES Showcase, ‘Live at Heart’ to full houses and rave reviews.

Review Anything... by Our Review of Lovers In The Night
The Recks are from the tiny island of Sark, which is apt because Guide Daily is often viewed as a tiny island of sark in the ocean of grown-up seriousness that is the rest of the Guardian website....
Sark Attack by The Recks were back at the Fermain Tavern
Sark band The Recks were back at the Fermain Tavern last Friday supported by Thee Jenerators and Ray & The Guns. Tom Girard was there... Last Friday night, following a year of build-up that has...
Sark Band Unleashes 'Beast From The Sea' by At Star-Studded Music Festival
Sark band, The Recks, will be sending their “schizophrenic folk” across the sea to play among international stars and up-and-coming acts in a London music festival today. The well-known stalwarts...
p
A
n
E
F
Song Title by Artist Name