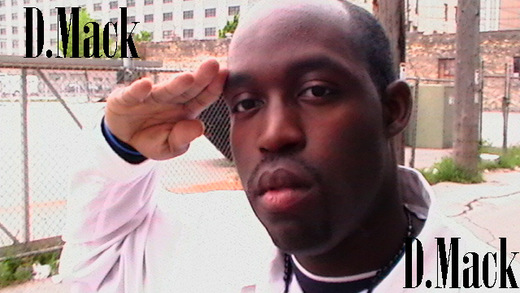 David Mack was born/raised in Gary Indiana 1984, by the age of 14 he started writing music and later created a name that would be attentive and inspiring; he named himself (D.Mack).

In the year 2000, hip hop introduced itself to him and it change his life forever, from seeing groups like (Mass Reality, Resistance, Reaction, and United Souls) he knew that is what he needed to do and took it very seriously. Later in 2003, he was mentored by David “Shotyme” Holmes, Ceita “Big Rec” Simple who took him and several others under their leadership and taught lyrical content , performance and music itself, from that he was form into a group called “Living Epistle” which comes from the book of II Corinthians 5:15.

His music and lyrical content has always been more of a positive mode so anything that protans to violence, jewelry or even cars he will not address, he feels that’s all hip hop artist ever talks about, he’s music has travel with him to several places (Saint Louis Missouri, Gary Indiana, New York, California and Tulsa, Ok)

He is currently in Milwaukee, WI working on his first mix tape album entitled “The Beginning LP” which is a storytelling album also he has a single available on iTunes called “Say Aye (Remix)”

D.Mack’s words of encouragement are “Let the Negative Ride Bring the Positive In.”