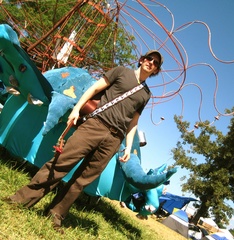 Currently splits his time between New York, NY and Velvet Elk City, where his crushed-velvet recording studio is located. There are banjos, harmonicas, guitars, tambourines, mandolins, basses, accordians, and a wurlitzer strewn across his studio in various states of disrepair. A Betsy Ross edition piano sits handsomely in the corner, a full and melodious half-step out of tune. A fact that doesn't sit too well with his band.

Drinks too much coffee. Talks to himself a lot. Wishes he wrote "Red-Headed Stranger" by Willie Nelson, but to this day, refuses to wear a bandana.

“With Photographs Of 1971, Don DiLego has taken another step towards establishing himself as one of this generation's best up-and-coming singer-songwriters.” / Blogcritics Magazine

“The disc recaptures the rhythym of 70’s movies and photographs, as well as DiLego’s own distinct take on alt-country.” / David Dye from The World Café, WXPN

Photographs of 1971 is one of those records that creep up on you, a great vibe and very strong tunes.” / XM Radio-Mike Marrone/Program Director The Loft

“’Falling into Space’… speaks volumes about DiLego's ability to craft finely written pop songs with country and folk tools that many artists might cast aside.” / The Bridge, Texas A & M

A Masterful follow up to his "Lonestar Hitchhiker" series. / The Big Takeover!

“Not since Bruce Springsteen's Nebraska has a concept album been more stirring or truthful. With a rich sense of orchestration, the album is masterfully arranged in a way that is reminscent of Smile-era Beach Boys…making Lonestar Hitchhiker a true and significant masterpiece.” / Northeast Performer

The Lonestar Hitchhiker by Northeast Performer
Recorded at Electric Lady Studios Produced by Michael Mangini & Don DiLego Reviewer -AF YeagerDon DiLego ought to be incredibly proud of his road trip inspired album, “The Lonestar Hitchhiker”....
Photographs of 1971 by Pop Matters
by Jason MacNeilDon DiLego got the idea for this album by looking at old photographs, deciding to bring those still pictures of bygone days back to life. While it’s often a cathartic process for...
Photographs of 1971 by Blogcritics Magazine
Written by Dave LiftonI kinda have a 'thing' for the art of the 70s," Don DiLego writes in the liner notes to his third album, Photographs Of 1971. "There was a particular sense of style and rhythm...