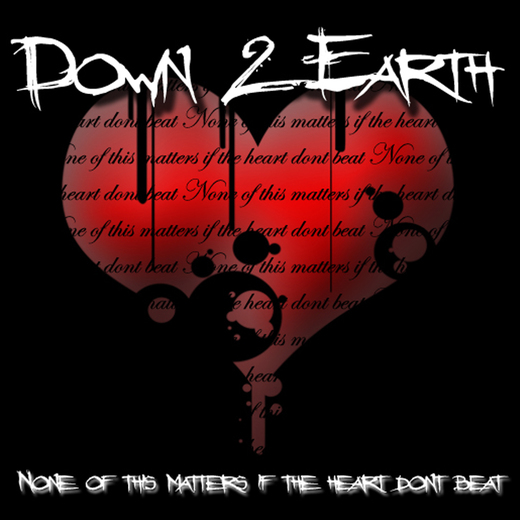 C.J. Rhodes is the singer/rapper and songwriter for the band Down 2 Earth. Down 2 Earth is under the independent label Down 2 Earth Productions which C.J. also owns and runs. Back in 2005 C.J. started Down 2 Earth after his traditional three piece band "Rat Shed" broke up in 2003 which he was frontman and singer/guitarist and songwriter for. When C.J. started Down 2 Earth he made it his mission to write music solely dependent on himself and no one else. When Down 2 Earth began its style was reminiscent of emo but with an electronic feel and to top it off with aggressive raps here and there. After putting out a demo album to test the waters for what was possible titled "Everything and Everyone" that is no longer available C.J. went on to put out Down 2 Earth's first official album "Alive and well" in 2007 after being released from a four month jail sentence where he wrote most of the lyrics. Down 2 Earth now had its unique style and was on a mission to be heard. In 2009 put out a second album called "Photography Love". This album was deeply intertwined with songs about C.J.'s relationship with a girl he fell madly in love for 2 and a half years only to be heart broken. Not only that but Photography Love began to shape a new pop sound that C.J. began to move towards with Down 2 Earth's sound. Now here we are 5 years later with Down 2 Earth's junior album titled "None of this matters if the heart don't beat" and an addition of band members. In 2013 C.J. added two childhood friends "Young" Ali Shamdin, and "Kill Bill" William Beavers to the mix to beef up Down 2 Earth's sound and add diversity. C.J. is now accompanied in the vocal department with Young as a second rapper who adds his southern rap style to the tracks. Kill Bill assist C.J. with the drum beats to all the songs to give Down 2 Earth a more perfected beat. The new album definitely has a party pop hip-hop feel to it that gives a sense that this was what Down 2 Earth was sent to sound like when compared to all previous albums.

Down 2 Earth's 3rd official album coming in March by None of this matters if the heart don't beat
Down 2 Earth's 3rd studio album is now on its way to completion. Five years after the last album Down 2 earth is back with new band members controversial hooks that have a powerful indie pop feel...
p
A
n
E
F
Song Title by Artist Name