Tel Aviv's hottest Art rock group Eatliz (Video EPK) have been causing quite a stir in the world of alternative rock for some time now, gaining them an ever-growing cult following worldwide. Eatliz is Tel Aviv’s most innovative act that is known for spectacular shows all over the world including major festivals (Primavera sound in Spain, Exit festival in Serbia, SXSW in Austin TX and more), outstanding genre crossing music and cutting edge animation music videos.

Releasing albums for half a decade to critical acclaim, the band’s tendency for sonic pounding mixed with delicate twisting have struck a chord with listeners worldwide who appreciate unconventional song structure and intense roaring loudness meets playful mood swings. Playing what’s been termed as “Art Rock” Eatliz music features elements ranging from pop with a Middle Eastern edge and to four on the floor guitar stomps. The result is a sound that calls to mind artists like Mr. Bungle, Björk and Portishead.

Eatliz astounding creative vision is also demonstrated in their eye-popping videos for songs such as "Lose This Child", “Hey" and “Attractive”, which were seen by millions in festivals all over the world and won many awards, including the prestigious Spike Lee Award at Tribeca Film Festival in NY and was screened before "Avatar" at cinemas across the US.

With the support of MTV Europe, Eatliz toured Europe and the US, including the slot of opening act for major international shows in Israel as Porcupine Tree and "Zappa Plays Zappa".

In Spring 2012 Eatliz made their debut in China. Later on they will tour Europe for summer festivals and release their forth album on 2013.

1. 4x7 meters
2. 4 mics for vocals
we need to mic drums
we need to mic guitar amps
3. we need 4 boom mic stands
6 guitar stands
4. we need 3 guitar amps and a bass amp
5. we need a PA system and a mixing console
24 inputs
6. we need 2 direct input assignments
for acoustic guitar and bass
7. 6 stage monitors
8. basic lighting will suffice
9. we might need a sound technician (we do have
our own sound technician, but is not always
available for overseas trips)
10. we require transportation and accomodation
for 6/7 people.
Stage Plot: 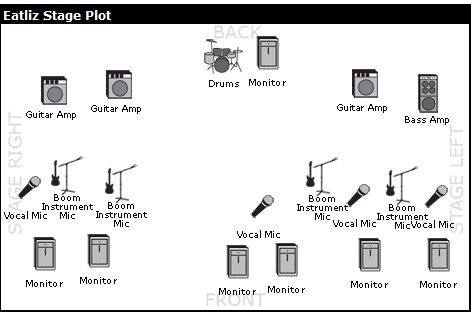 The next best thing by Maariv
EATLIZ are a band of super musicians, that butcher in enjoyment every musical genre" (Maariv).
Time-Out Tel Aviv by Time-Out Tel Aviv
... a critical mass of talent that is bound to explode overseas. It is highlyrecommended to absorb it, as long as it's still here(Yoav Bril "Time-Out Tel Aviv")
Attractive is one of the best videos from Israel by Time Out Tel Aviv
Forget the fact that Attractive is one of the best videos ever made in Israel, the good news is that EATLIZ are finally giving us a chance to listen to what's been cooking in their studio for so...
a big hypnotic musical jorney by (Walla magazine
By simple definition, EATLIZ plays an energetic variety of rock, jazz and a bit of metal. In reality, we are talking about a big hypnotic musical jorney... The quality of the musicians in the band...
Charissa’s Global Rhythm Blog by Charissa’s Global Rhythm Blog
...I was treated to a blast of some of the most pleasantly dissonant and disorienting melodies I’ve come across in terms of world music. The melodies seem driven by a dizzying, taurine-addled...
a supermarket of music by German Interregnum Metal Radio
So, if the keyword Israel should say something spontaneously, It will tell me the Wailing Wall, orthodox Jews, rolling tanks and heavily armed soldiers. For this picture a band like EATLIZ does not...