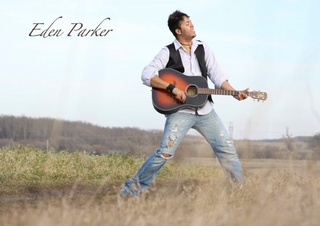 Eden Parker began playing the piano at age 6, wrote his first song at age 11, and picked up a guitar for the first time when he turned 18. Voted “Best Emerging Solo Musician” of 2010 in the High Plains Reader, Eden recently completed a West Coast Tour, and competed as a Regional Finalist in the Colgate Country Showdown. His debut solo album “Leaving Eden” was released on August 3rd.

Eden Parker - Best Emerging Solo Musician 2010 by
If new music is your thing, then a best bet is Eden Parker. This singer/songwriter has been playing the piano since the age of six and writing songs since eleven and can be commonly seen playing...
Thousands gather in Chicago by for American Idol auditions
Eden Parker, 23, plays guitar for an unconventional singalong, as thousands gather outside United Stadium for the American Idol Auditions - Chicago Tribune (Jun 24, 2009)
Keri Noble & Eden Parker at the Aquarium by
Any classification in terms of musical genre would fail to express the nature of Eden Parker, so we highly suggest you find out for yourself." - Zach Kobrinski, High Plains Reader
p
A
n
E
F
Song Title by Artist Name