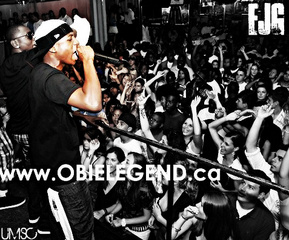 Elijah Grant (born June 15, 1992) better known as EJ is a rapper and producer. He makes beats on FL Studio (Fruity Loops) and he was recently in a group called Silver 1's. He's been rapping since he was about 12 and is now going strong on a solo career making his way to the top! He started producing about the same time on FL Studio seeing he gradually get better at sampling and finding melodies, yet he doesn't know how to play the piano.

He liked hip-hop, rap and R&B his entire life. He also likes to hear other types of music to give him other ideas to change it up and create different styles of songs and lyrics he creates. He loves to listen to Kanye West's music and he revolves his self around him in his own music a little bit and is his favorite rapper. He also likes Lupe Fiasco and Common because of their metaphors and intelligence in their lyrics. Jay-Z, Lil Wayne, and T.I. are at the top of his list also.

He doesn't have an engineer. He records on his mic in his little studio in his basement and edits and masters his own music on his home computer. He loves to do what he does best and loves making music for people. Everyday he's on his computer for hours doing music and trying to become better at it. His sister Queen Cee, who is a huge R&B singer in Hamilton, inspires him to continue to do music and helps him realize that he can help make his family have a better life. His sister won R&B/Soul Recording of the Year at the Hamilton Music Awards in 2008, which inspires him to have as much and more success than his sister. His brother-in-law is also a hip-hop artist and his father is a DJ, teaching EJ more about sampling and vinyls to help expand him in the music industry.

Recording as much as he can, he wants to reach the top, give a name for himself and let the whole world love his music just as much as he loves doing it. His vision is clear to be a huge Canadian hip-hop artist living the American life, known all over the world. He realizes the steps and obstacles that are in his way and is ready to face them with no fear. He's ready to go on his path to stardom!
p
A
n
E
F
Song Title by Artist Name