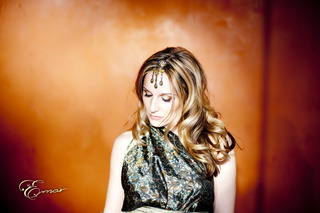 EMAR (pronounced MR) is a Mystical Poet, Songwriter and Recording Artist who sings in multiple languages.

Her debut album EMBRACE YOURSELF, released under her full name Melissa Rebronja, included the radio single & BRAVO TV video "Beautiful" as well as the huge Itunes download, her haunting version of "Wonderwall." She quickly followed up with YOU'LL BE MINE

Following her gypsy spirit into new musical realms, by 2008 she began releasing music under the name EMAR. She won rave reviews from international media, dj's and fans for SACRED SOUL, on which she sang in English, Serbian, Hindi, Persian, and Arabic. She added Mandarin, Gypsy, and Farsi to the mix on MOON, proving how far from your mother tongue you can go to express yourself when the spirit moves you

Exposed to the war in her place of birth, she knows about the bruised places on the earth and in our souls, but also the power of sound to heal and unite

Music moving from one tribe to all tribes, radiating compassion and communion.

Her latest project is Hypnotic Dance Meditation. Check it out!

Melissa Rebronja and EMAR MUSIC IS AVAILABLE ON iTunes and CDBaby.

EMAR: Sacred Soul in FutuReale Magazine by FutuReale Magazine
Enlightenment and Entertainment all Wrapped in One" On October 7th 2008, friends and members of the press gathered together at Foundation Room on Church Street to celebrate the release of local...
EMAR ~ Sacred Soul in Indie-Music by indie-music.com
Calling on a rich tapestry of multi-cultural influences, Sacred Soul is a beautiful and atmospheric blend of electronica and world music. Invoking rich musical traditions and styles, Emar takes...