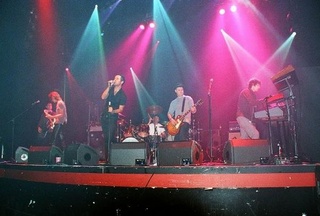 New York songwriters Alex Curran and Vincent Capolupo, along with renowned guitarists Allen Hulsey and Jonathan Pointer, bassist Tom Guinan and drummer John Melissinos, bring their signature blend of dynamic, atmospheric, modern rock straight to the edge with Emperor City Motorcade. This band’s “magic line-up” fuses the incredible talents of these six individual artists, creating a sound that lives up to the depth and scope of its name. After a year of rehearsing and work in the studio, the band is pleased to release a new collection of songs as exhilarating and memorable as their live stage performances. Available on iTunes and eMusic.com, Emperor City Motorcade-- the band’s self-produced debut CD-- captures a wide range of musical textures, stunning instrumentals and soulful lyrics that creates a listening experience unlike any other. Songwriting has always been the primary focus of this prolific rock band. Evidence of this can be found in the praises of (Grammy award winning producer) Andy Johns recognized for his work with Led Zeppelin, The Rolling Stones and Van Halen. Andy can be quoted as saying “The bands songwriting has a maturity usually only seen in legendary bands after their 3rd or 4th album”. Other notable collaborators include Jay Messina, known for his work with classic Aerosmith, Kiss, Miles Davis, John Lennon. Emperor City Motorcade’s music has been featured and commented about on FOX 5 N.Y. morning news and Q-104.3’s Ground Zero show. They have also been featured in the Rush & Molloy column in the N.Y Daily news and positively reviewed (side by with Pink Floyd as they received the same rating) by columnist Jim Farber of the same paper. Anita Talbert of L.A.com said that their music was the next hot thing to watch out for. The band recently won 1st Place in the "Art for Progress" Clash of the Artists for 2008, and proudly contributed four original songs to be featured in the upcoming independent film Rex (scored by keyboardist Vincent Capolupo).